Pick up your sneakers, I asked 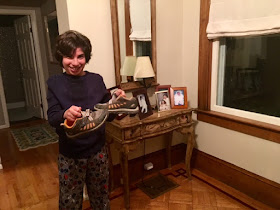 Often, the item lying in the hallway belongs to Sabrina. She leaves stuff everywhere: her backpack by the front door (for the entire weekend), her discarded shirt on the couch, her half-eaten yogurt on the kitchen counter, her hairbrush on my bed, as I discovered when I lay down on it the other night.
Max, he doesn't leave things around the house (other than the occasional toy fire truck) because we take care of him. We carry his wheeled backpack up the stairs—it's too heavy for him—and put it away. One of us helps him get dressed and undressed, brushes his hair, serves him food.

Max pitches in here and there, sorting laundry and setting the table. He gets a kick out of helping me find my phone, which I'm forever misplacing. "Max, do you know where my phone is?" I'll ask, and inevitably he does. "Yes, Mommy!" he'll announce, gleefully, and he'll go off and find it for me.

It remains to be seen whether Ben has inherited Dave's leave-it-lying-on-the-floor gene. Sabrina didn't get that from me. (She did, however, inherit my carb gene.)

"Sabrina, could you put your sneakers away?" I ask.

"They're Max's," she points out. Oh, they are. Dave left them there when he took them off him.

I'm on the verge of asking Sabrina to put them away when I catch myself. This isn't her responsibility. Too often, used to doing things for Max and caught up in the whirlwind of the day, I neglect to ask him to help around the house.

"Max," I say, "can you come here?" And he appears, and I point to the sneakers and ask him to put them away.

"OK!" he says. And he bends down. He drops one a couple of times. Then he clutches them tight and walks off. I'm glad, and not just because he's picking up after himself. Although Max usually forgets to use his right hand, the weaker one, he's holding a shoe in each hand.