Life is hard when your homework is this easy 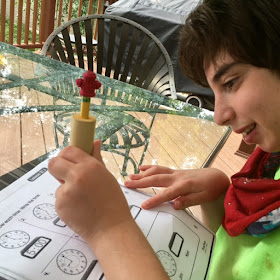 We're on our deck, sitting at the table as Max completes a worksheet about analog time. He's getting all the answers right, and he's gleeful about it and even a bit smug. I like that.

This is a new thing, him telling me that homework is "easy." I appreciate it because his intellect is humming along, because he's taking pride in his reading and comprehension abilities and because for many years few things came easy to him.

In general, Max is becoming quite the know-it-all; he regularly informs me "I KNOW!" when I tell him things. But there's a flip side to this, which is that he occasionally makes like he understands things, even when he doesn't.

Max is at the point where he truly wants to get his homework right, and where he wants to seem capable. That's good. Sometimes, he'll admit "I don't know" when we're doing, say, his current events homework and he's not sure of an answer. Sometimes, though, he'll forge ahead even if he is unclear on something. I can tell by the look in his eye, and I'll call him on it:

"Max, did you really understand this?"
"Yes!"
"OK, then tell me why the mouse turned on the lighthouse light."
[Silence.]

The other day, Max brought a worksheet home that he'd completed in school: "Volume of a rectangular prism #1." The words struck fear into my hear.: Math was not my strong suit at school or ever. If you ever want to terrify me, whisper "hypotenuse" and "pythagorean theorum" into my ear.

Math isn't Max's strong suit, either. He is still working on basic addition and subtraction. So how in the world was he getting rectangular prisms?

I put in a call to the teacher. I asked, point blank, whether volume and prisms were too complex for Max right now. She noted that the class works on basic math throughout the week. She said that Max had a growing grasp of the concept of volume, and that he was so excited when he got it right.

And then, she told me what a delight it was to have Max in class because he is genuinely excited to be at school and to learn. It's so true: Max loves school. He has been known to cry when he has days off due to, say, a teacher's conference.

I grinned a big grin as the teacher spoke. Max has got lots to learn, as do we all, but being psyched about stuff like prisms puts him ahead of the curve.
Ellen Seidman at 6:35 AM