The other night, I saw a new ad for Hillary Clinton's campaign. It features Jennifer Kohn, a Republican who has a son, Max, with autism. She noticed that it's not uncommon for kids with autism to flap their hands. When she saw Donald Trump making that gesture in jest, she found it "completely disqualifying."


Last November, Trump came under fire for seemingly mocking a New York Times reporter with disability at a rally in South Carolina. The journalist, Serge Kovaleski, has a condition called arthrogryposis that affects his joint movements. 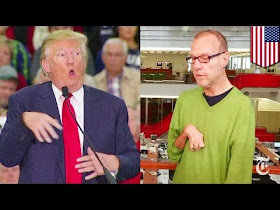 Last Spring, the nonprofit Family Member (I'm on their advisory board) took out an ad in the Hollywood Reporter, expressing outrage that people were so incensed over Trump's mockery and yet, tolerated regular ridicule of people with intellectual disability in film and comedy routines.

Plenty of people do not take it lightly when others make make fun of those with disability, including parents like me. Earlier this year, when comedian Gary Owen made cruel fun of a cousin with intellectual disability in his Showtime special, disability self-advocates and others spoke out. Eventually, Owen removed the offensive content from the show.

You can imagine, then, that some of us take it even less lightly when a person who pokes fun at someone with a disability is a presidential candidate. Trump's impulsive mocking of a reporter with disability revealed his immaturity and disdain, just as his unscripted words in that Access Hollywood tape revealed his immaturity and disdain toward women. His behavior was yet one more example of his intolerance toward a minority group.

Hillary Clinton is right to use this incident as propaganda, and raise concern about a candidate for President of the United States who is childish enough to make fun of someone's physical appearance. In contrast, earlier this year she announced a major autism initiative for people on the spectrum.

Mom Jennifer Kohn notes in the commercial that she may not always agree with Hillary but she considers her reasonable, smart and capable of working with people to solve problems. Meanwhile, Donald Trump continues to alienate people with his words and actions. His public demeaning of a respected journalist who happens to move in a different way than is typical created yet another divide.