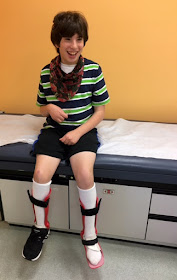 I had my list of observations and questions to run by the orthopedist during our visit last week, starting with: "He's tripping more often."

Max has taken a number of spills in recent months. Although his arms lack the reflexes to shoot out and cushion his fall, he somehow tends to fall to the side and in slow motion so he hasn't really hurt himself. Still, I've been concerned that he will.

Max did not want me to bring up the falls to the doctor. He tends to put an "Everything's great!" spin on life, which is generally a good thing but also means that he doesn't want to talk about stuff that goes wrong. I told him we had to discuss it, especially because firefighters can't fall when they are on the job.

Max breezed right into the hospital where the doctor's office is. "Wrong name!" he informed the receptionist who checked us in; her computer listed "Max" and not "Fireman Max." He requested that she change it. When we got to the waiting area, I asked the nurse if she could call Max into the exam room as "Fireman Max." I no longer feel sheepish about making these requests; I say them with a totally straight face.

Soon enough, Fireman Max was called in. The doctor took off his foot braces, felt his feet and had him walk around. Dr. T. noted that Max's right foot, the one that turns in, looked the same as it had four months ago. That was good enough news; I wasn't expecting it to get better. The spasticity is what it is. He recommended that Max sleep with his right foot brace on at night.

Max's back was straight, the doctor said, also a win. "If he doesn't have spine curvature now, is that a pretty good indication he won't get scoliosis?" I asked. The doctor said yes. A happy dance ensued in my head.

Then we talked about the tripping. "Max might need tendon surgery at some point," the doctor said, and my heart sank. I know that was a possibility for him. People with cerebral palsy sometimes require tendon lengthening or cuts to alleviate tightness.

"In your experience, do children with Max's level of CP typically require surgery or not?" I asked.

"Every child is different," he answered, just as I knew he would. He noted that we wouldn't know for a while. He said that Max would have to be off his feet for four to six weeks after having the surgery.

WHOOOOOOOOSH. That was my brain fast-forwarding to the future. What if Max's foot got worse? What if he did need the surgery? Would it be painful? How would we keep him off his feet for four to six weeks, or out of school? Would it ultimately help?

Max brought me back to reality, because he was attempting to log into the doctor's computer—no doubt, to make sure his name was in the system as Fireman Max.

"Max, you can't use the doctor's computer," I said as he pressed the alt and F10 key to reboot it (impressive).

As we drove home, I thought about whether or not Max's right foot would keep turning in more and the potential for surgery. As I lay in bed at night, I pondered it.

You'd think that after all these years, I would know better than to ruminate over what I can't control. And to some extent, I have improved. I was steeped in worries about Max's future when he was a baby, to the point where I'd read and reread the same chapters in What To Expect: The First Year hoping that I would find one thing—just one little thing—that he was doing on time. The obssessive worrying has abated as the years have passed. Yet at times, I can't help myself: I peer into the future and worry about what could be.

The very next day, we had our annual appointment with Max's wonderful neurologist. After we'd updated him on Max's progress, I asked for a better understanding of where Max was cognitively.

Dr. C. went through a series of questions: Could Max understand dates and schedules? Yes. If we took Max somewhere—like a museum—and focused on, say, a painting, would Max stay tuned in or would he start talking about fire trucks? He'd stay tuned in—and at some point, also ask if there was a nearby fire station. And would Max remember the next day what we'd told him about the painting? Yes. Did Max care what other people thought of him? Well, to some extent—he wants to look good lately, although he doesn't seem to get the niceties of social interactions (we told him about Max's tendency to point out baldness).

And then, the doctor asked a big question: Did Max have a good data bank of knowledge?

And I couldn't wholeheartedly say yes. Max does talk about a growing number of different topics. But even with his beloved fire trucks, he doesn't know that much about their parts, inner workings or history. I've gotten him books packed with details about fire trucks, he just hasn't taken an interest.

The doctor talked about bolstering Max's working memory. We could start with his favorite fire station and talk about the name of the street it's on, the year it was built, find out how many firefighters work there, etc.

"The more you build up his memory," Dr. C pointed out, "the more active his mind will be as he gets older."

Then I asked my big question: Based on patients he'd treated who were similar to Max, what kind of job might Max have when he gets older?

The doctor gave me a kind look. "I'm not going to answer that," he said. "Because we don't know where Max will be cognitively as an adult, he still has so much potential."

And that was the truth. And yet another reminder to stop looking for answers where there are none.
Ellen Seidman at 6:37 AM