Things only a parent of a child with disability would notice 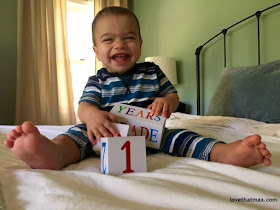 This video of Ben laughing has been making me laugh for days. Sabrina was entertaining him by dropping ice cubes on the floor. Every single time I watch it, I get a lift. I actually watched it several times in the midst of the debate last night when my blood pressure shot up.


Besides Ben's hearty and infectious chuckle, I also adore how nice and relaxed his hands are. This isn't something most people would notice, unless you've had a child whose hands were usually clenched as a baby, as Max's were. It totally panicked me and Dave, since we knew the tightness was a sign of cerebral palsy.

Max was likely going to have CP because of the stroke he'd had at birth but still, Dave and I were in between denial and pure terror. When we'd go to a mall, we'd stare at other babies passing by in their strollers and stare at their hands. Whenever we'd spot one whose hands were closed, one of us would excitedly point it out. In our minds, it meant that maybe Max wasn't doing so badly after all and that other babies were going through the same thing.

In our hearts, though, we knew that Max's hands weren't at all like other babies' even though they looked just as deliciously pudgy and dimpled. Mostly his hands were fisted, even as he neared a year old. It made grasping toys and finger foods hard or impossible for him. He couldn't put objects into his mouth, one way babies explore the world around them. Even when Max started crawling, we didn't have to babyproof very stringently because there was no danger that Max would swallow errant objects; he didn't have the fine-motor skills to grab them.

What's strange to me about these thoughts is how much of a disconnect they are from the awesomeness of Max, and how much I revere this boy. I don't sit around thinking that I wish he didn't have challenges with his hands or otherwise—I accept him for who he is. I typically don't sit around wishing he didn't have cerebral palsy, although there are times when I curse it. But we went through a certain hell during the first year of his life, and I don't think I will ever fully get past it. Having Ben is bringing back a lot of those memories, and it makes me grateful that Ben is developing as he should.

Ben is really expressive with his hands. He has a way of wriggling them around when he is excited about something, especially when he's eating.

We call them "happy hands" and when he twirls them, I feel really happy, too.