The important lesson this viral photo can teach children 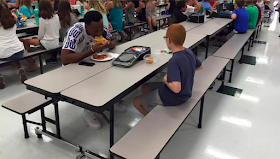 It's happened, once again: A kind gesture for a child with special needs is going viral, this time involving a football player and a boy with autism. And once again, I'm wondering about the "after" part of the happy.

On Tuesday, Florida State Seminoles player Travis Rudolph and several teammates visited Montford Middle School in Tallahassee. When Rudolph noticed student Bo Paske alone at lunchtime in the cafeteria, reports the Orlando Sentinel, he walked over and asked if he could sit with him. Bo said yes, told him his name and the two started talking football. "It was really easy to [talk] with him," Rudolph said. "He had a nice smile on his face. He was a warm person."

Someone at school snapped a photo and sent it to Bo's mom, Leah. She wrote a heartfelt post on Facebook, and shared the photo. 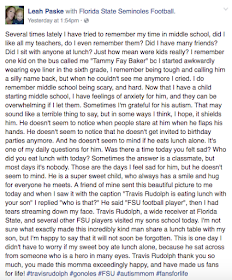 This morning, Dave sent me a link to the New York Post article, headlined "Florida State Player's Incredible Gesture Will Bring You To Tears." For sure, a lot of people out there will find this story heartwarming. Just as people have been moved by viral stories about children with autism getting an outpouring of birthday cards, packages and celebrations from well-meaning strangers who've read about their lack of friends. Just as people get the warm fuzzies from stories of football teams allowing players with disabilities to score touchdowns.

Deeds like Travis Rudolph's are happy-making and validating for children with special needs. Confidence-boosting too, I'll bet. As a special needs mom, I get that rush of gratitude you feel when someone treats your child with kindness and respect. Still, these stories raise questions even as they melt hearts.

What happens to these kids after the good deed is done? Do these happenings alter the mindsets and attitudes of fellow students toward their peer with special needs? Do they make school administrators realize they need to step up inclusion efforts? To be sure, the social scene in cafeterias can be brutal for many students, but for one with autism, both the crowds and the din may add to their challenges there.

When I read these stories, I hope that after the headlines stop cropping up on our news feeds, life does change for the better for the children and teens who are recipients of good deeds. Actually, these stories have the power to change the lives of children with special needs everywhere. Parents could use the story of Travis Rudolph and Bo as a conversation starter for a discussion with their children about peers with disabilities, adjusting the questions to be age-appropriate.

"Why do you think that boy was sitting alone at lunch?" you could ask.

"How do you think you would feel if you had nobody to sit with at lunch?"

"What do you think of what this football player did?"

"If you saw a child sitting alone at lunchtime, what could you do?"

And then remind them, because they likely don't understand, that it's pretty easy to approach a peer with special needs. Maybe that boy or girl won't want to talk with them right then and there, because making friends can be hard for some kids with autism. Maybe he won't look right at them. Maybe he'll speak slowly or use an iPad to say his words. Maybe he'll make a movement like flapping his hands because he'll be excited. But a child could try. As I always say, just start with "Hi."