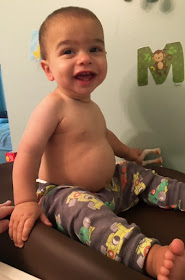 If you'd asked me last week who's more neurotic about Ben's well-being, me or Dave, I would have voted for Dave. In my opinion, of course, although the facts are hard to argue with. Like: Recently, we were supposed to go on a family retreat held at a camp and Dave decided Ben shouldn't go because there were bugs and maybe a thunderstorm and the bunks were...bunks.

While Dave was there with the kids, I sent him this photo because Ben started pulling to stand and looked so cute. "Why is he standing on his toes?" Dave wanted to know. "Because he's baby," I noted. 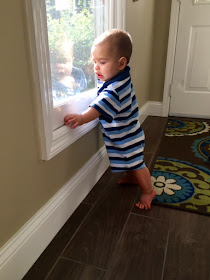 Dave is usually a pretty chill person, and it's tempting to tease him about his hyper-caution with Ben. After the baby was born, Dave would voice worries such as, "When I put him down in the crib, his head fell back a little before his body was on the mattress, do you think that's OK?" He was just as overly concerned during my pregnancy, when he'd text reminders like "Eat salad and eggs" and I'd respond "For dinner tonight I am planning to have undercooked meat, raw eggs and unpasteurized soft cheese. Do you want me to save you some?"

As of today, though, I'm no longer sure who's the more neurotic parent. Maybe we're tied.

The realization happened on Sunday, when I went to visit my friend Erica. Her son is in the hospital, and I brought her some therapeutic cupcakes. As we sat on the floor of her kitchen and played with Ben, she said, "What's that on his neck?" I looked. And, indeed, one side of Ben's fleshy neck was pudgier than the other. Then he moved and I could see that there was a definite blob there, like he'd swallowed a mini golf ball and it was stuck in his neck.

My heart stopped. As Erica talked, I kept staring at Ben's neck. The lump was mostly only visible when he looked to the side. As soon as I left her house, I sat in the car and Googled on my phone. Best case scenario, it seemed, it was a cyst. The worst case is too scary to mention.

I called our pediatrician's emergency line. The doctor on call said that given that the lump wasn't red and hot, it didn't sound infected, and I could bring the baby in on Monday. I wasn't so sure either of us could wait.

Whenever I looked at Ben all I could see was that lump. It was like he'd grown a third cheek. As he hung out in the playpen, I scrolled through pictures of him. Mostly, he just looked like he had a pudgy neck, but I realized that in one of the photos I'd put on the blog just yesterday, the lump was visible. How could I not have noticed it? I felt awful and not nearly neurotic enough. 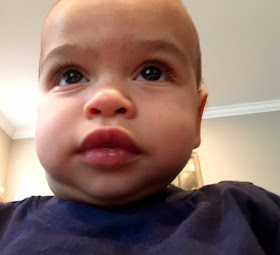 Meanwhile, what I did spot was a big brown spider on the floor, in a corner of the kitchen. It literally was the most gigantic spider I'd ever seen outside of a zoo. I thought it was the one I'd noticed in our living room a couple of weeks before that scuttled behind a bookcase when I tried to whack it with a shoe.

I grabbed some newspaper and WAP! WAP! WAP! Ben cracked up.

I grabbed at the spider with a couple of paper towels, averting my eyes; crumbled the paper towels, put them in a plastic bag along with some other garbage; tied the bag and tossed it in our kitchen trash. I wasn't taking chances. And then, nerves frazzled, I booked an appointment at a local pediatric urgent care center and headed out with the baby.

"It's a cyst, filled with fluid, but you might need to head to the ER and get an ultrasound today," the doctor told me as she felt Ben's jaw. "It's pretty large."

"Is it dangerous?" I asked.

"If it gets bigger, it could impair his breathing," she said.

Tears filled my eyes. The cyst confirmation was unnerving, even more so that the doc thought it could require an ultrasound ASAP. She told me she'd check with colleagues at the ER, and walked out.

Ben proceeded to grab all the books on the window ledge by the exam table and giddily toss them on the floor. He was his usual self. I was not. The doctor came back, said we could wait until the next day when we visited the pediatrician and prescribed an antibiotic to ward off infection.

On the way home, I called Dave and told him what was going on. He was freaked out. I tried to calm him down, even though I didn't feel calm.

Back at home, something suddenly occurred to me in capital letters: WHAT IF THE SPIDER WAS A BROWN RECLUSE AND IT BIT THE BABY?

Brown recluse spiders have venomous bites. The photos I googled all kinda-sorta resembled the spider I'd seen. Forget the fact that these spiders are not native to the Northeast, where we live. Forget the fact that Ben's lump looked nothing like the bites in photos—it wasn't hard or red, there was no telltale white spot or bite mark.

But still: IT COULD BE A SPIDER BITE.

Later on, after Dave, Max and Sabrina were home, I dug around in the garbage.

"What are you looking for?" Dave asked.

"Nothing," I muttered, because I didn't want to further freak him out.

I opened the plastic bag I had tied. Gingerly, I unwrapped the paper towels, dreading the sight of the spider. Only the spider wasn't there. What if it was somehow still alive and had done a Houdini escape? Was it one of those jumping spiders? Were they poisonous? I quickly shoved the little bag back into the garbage, grabbed the whole bag and brought it outside to the trash bin. Minutes later I went back out, removed the bag that may or may not have still contained the spider and put it on a shelf in the garage. Just in case it ever needed to be identified.

Dave and I kept discussing the neck lump until the season premiere of Fear The Walking Dead came on, and we distracted ourselves with zombie gore.

At some point, Dave went up to check on Ben. "Honey, he usually sleeps with his legs tucked under him, tonight they are flat, do you think he's OK?" Dave asked, and for once I didn't think he was being ridiculous. I went upstairs and looked for myself, and Ben seemed fine.

I slept fitfully that night. I dreamed that Ben was sitting at the edge of a table and fell over; I woke up with my arm flung out, trying to catch him. Several times, I got up to check on Ben, touch the lump and make sure it hadn't gotten any bigger or felt hot.

First thing the next morning, Dave took the baby to the pediatrician's walk-in hour. "This doctor also thinks it's a cyst and we need an ultrasound," he said when he called. Afterward, Dave headed over to the imaging center down the street and they took the baby right away. The radiologist confirmed it was a cyst. It had likely been congenital, present since birth, but for some unknown reason it had blown up.

Later that day, the pediatrician called with the results of the imaging. The cyst wasn't just a fluid-filled sac; it had several compartments, with some tissue. That means it will likely require surgery, rather than just a drainage procedure. Any chance it was a spider bite? Nope.

So now Ben has an appointment to see a pediatric surgeon on Wednesday and a mom and dad who stare obsessively at his neck and hope the surgery will be minimally invasive and won't cause any major discomfort. The bag of garbage that may or may not contain Houdini spider is sitting in the garage. As for me, I will not be teasing Dave anytime in the near future about being a neurotic parent.
Ellen Seidman at 6:35 AM