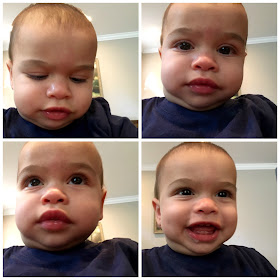 Ben's 10 months old, and when I posted his photo on Facebook last week a few people noted how big he's getting. Which made me a little sad.

I am clinging to this boy's baby-ness. I don't want it to be gone, and not just because it means I'll be knee-deep in toddlerhood. I am acutely aware of how precious these days are. 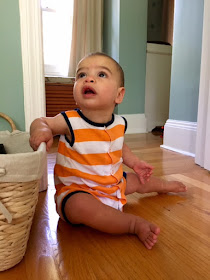 I haven't had enough of Ben in the summer rompers, with his roly-poly thighs, dimpled elbows and creased neck, wrists and ankles. 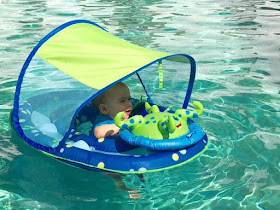 I haven't had enough of him enjoying the pool float. 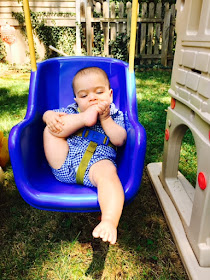 I haven't had enough of watching him try to shove his little bare toes into his mouth. 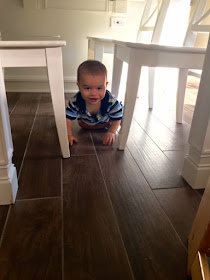 I haven't had enough of watching him crawl beneath the kitchen table. 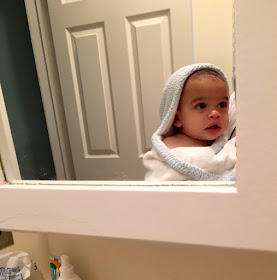 I haven't had enough of snuggling with him when he's out of the bath.


I haven't had enough of Ben blowing raspberries, the tufts of hair coming in and sticking out behind his ears, him patting Max's and Sabrina's cheeks, "Da! Da! Da!", holding him in my arms as I give him a bottle, spoon-feeding him, playing "Peek-a-boo!", that giggle when I drop stuff, his fist wrapped around my finger, the delight on his face when he's lying on the changing table and I do The Itsy Bitsy Spider, the way he sleeps with his knees tucked under his body and his butt up in the air, his intense focus as he examines the TV remote control, him sucking his thumb, how he holds up his arms when he wants me to pick him up, how he attempts to taste whatever he gets his hands on, his baby scent, when he rests his tired head on my shoulder.

I haven't had enough of any of that baby stuff.

I didn't feel this way with Max—I wanted him to get bigger, because I was desperate to see what he would be able to do. Would he crawl? Walk? Talk? With Sabrina, I felt similar to how I do know; I cherished her baby days. The stay-a-baby longings are most intense with Ben, though. We waited so long to have him, he is the last baby we will ever have, he is delicious and I am greedy.

I will, of course, love and adore the next phase of Ben. But I want more, more, more baby time.

"Thanks, I needed that," I answered. And I meant it. 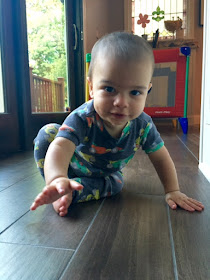