Talking family, disability and Hillary with Chelsea Clinton on a historic day 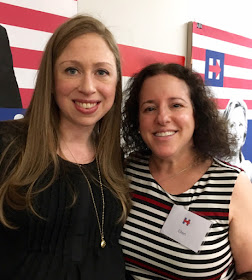 Yesterday, I had the good fortune of going to a roundtable discussion with Chelsea Clinton about family issues —a particularly great day to be at Hillary for American headquarters in Brooklyn, NY. I didn't go with any particular intention, but as it turned out, I had the chance to bring up an important point about children with disability.

Chelsea is charming, down to earth and super-sharp, as you'd expect. She acknowledged what's been happening out there ("I never thought I'd see in my lifetime the normalization of hate speech") and spoke about growing up as the daughter of Hillary and Bill and her first exposure to dirty politics, when her father ran for governor of Arkansas and the incumbent attacked her mother. 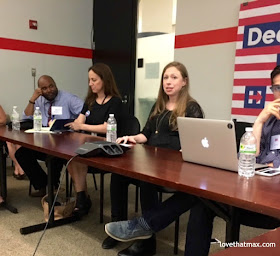 Chelsea noted that paid leave is a personal thing for her. When Hillary was pregnant with her, she worked at a very traditional law firm in which women who had children never returned. Hillary broke ground in creating a paid leave policy. "I couldn't imagine a better role model of a working mom than my mom," Chelsea said. She acknowledged that parenthood changes your perspective: "I didn't know I could care any more intensely about politics until I became a parent."

Soon, she opened up the discussion to questions about Hillary's plans. We talked education, healthier lunches for kids and more about paid family leave—which she referred to as "unfinished business" her mother is working toward. Disability came up several times. ""Every child deserves an education regardless of disability, and we've never fully funded that," Chelsea noted. "We need more federal support for structural changes that need to happen in schools." She also pointed out that it is legal to pay people with disability a third less than their peers make (workers with disabilities earn 37 percent less, or 63 cents to every dollar). "They're paid substantially less for equal work," said Chelsea. "That's outrageous."

Hillary's autism initiative also came up, an ambitious plan that includes screening, diagnosis, treatment, services and legal protection. My mind wandered. What about people with cerebral palsy and Down syndrome? I thought.

Chelsea had mentioned, at the start of our discussion, that she welcomed advice. I raised my hand and said I had a suggestion for making a message more universal. And I told her that I had a child with a disability that wasn't autism, and that while the autism initiative is amazing it excludes people like my son. I noted that one in six children ages 3 to 17 in this country has a developmental disability, and that if Hillary could address disability more broadly it would be a good thing. "I'll tell her," Chelsea promised. I truly hope she does.

On the way out, we passed by The Big H Wall, where staffers and visitors post sticky notes about what Hillary is fighting for. 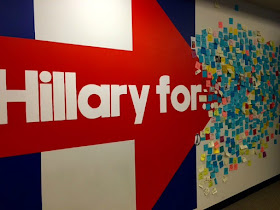 I added my hopeful note to the hundreds there. 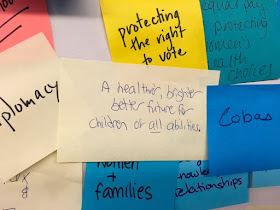 Back in January The RespectAbility Report, a nonpartisan political commentary on the 2016 election, asked the presidential candidates to answer questions about disability issues. Five of the eleven, including Donald Trump, did not respond. Hillary did; these are her responses.
Ellen Seidman at 6:38 AM