Feeling helpless about the Orlando massacre? One thing we can do 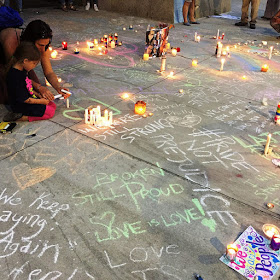 In my twenties, I used to go dancing with friends at a gay bar in New York City on Saturday nights. We found it both fun and freeing. We could dance our hearts out without getting hit on. We felt unscrutinized. We felt welcome.

I thought of those days as I read social media messages sent from Orlando's Focus club on the night of the massacre. They've been one of the most haunting things about the tragedy. Unlike 9/11, when Facebook and Snapchat weren't around, this time we could read plaintive texts from a young man who saw what was coming. We could watch a video taken by a 25-year-old woman minutes before she was murdered. They died in their safe space.

Like many, I've felt helpless these last few days, and angry. Helpless because there is nothing to do for the victims, other than donating money to their families. Angry because I feel powerless to do anything to prevent this from happening again. Like many, I've found myself ranting on Facebook about the need for gun reform and by that I mean an all-out war on weapons, as the problem is hardly just about making guns less easy to get; stolen ones are widely available on the black market.

But as I read and re-read the stories and stared at the victims' photos, I thought about one thing that we, as parents, can do: teach our children tolerance.

I didn't grow up with an abundance of it. My father had certain antiquated p.o.v's, and that's as much as I'll say because he was a wonderful father. Becoming a parent made me extra-conscientious about prejudice, especially as Max's mom. I quickly realized the discrimination and intolerance children with special needs face, sometimes through painful experiences.

I'm relatively liberal-minded, and assumed my kids would turn out that way. But as I've sat and pondered what I can do in the face of the Pulse killings, it's occurred to me that my children won't simply pick up tolerance and acceptance through osmosis. I need to make more of an effort.

I know that, as with most things, children watch and imitate our own behavior. This means being aware of how we talk about people who are seemingly different than us. Sabrina and I have had conversations about what's more alike than different about people with disability, and that everyone has their own unique abilities, but I have not done enough to address that about people of other races and ethnicities.

Raising tolerant children also means discussing differences that exist in our own families, and how we value them. Again, we've talked about this with Sabrina here and there, but come to think of it, never with Max. Who needs acceptance as much as any of us do.

Raising tolerant children means that when we talk about hate crimes, like this one, we address the why. Max still isn't aware of such events. Sabrina and her friends tend to text about them. I've talked with her about people hating others merely because of their skin color, religion, ethnicity, size and their choice of loving women or men. I've explained that people who hate are often very unhappy themselves. We had a good talk about this on Holocaust Remembrance Day in May.

Raising tolerant children means breeding confidence, as kids with low-esteem are the ones most likely to treat other people badly. This, I regularly try to do, ditto for the schools my children attend.

I recently read a great exercise for teaching kids about diversity, suggested by the Anti-Defamation League. Gather lemons in a basket and hand one out to each child. Ask them to examine their lemon and note how it's shaped, its size, its markings. Have everyone puts their lemons back in the basket, then ask them to find theirs. Usually, the kids are able to do so. Exploring how they recognized their lemons (whether because one was big, say, or had discoloration) can lead to a discussion about the variety that is humanity. And then, you peel the lemons, put them back in the basket and ask kids to find them gain...at which point they will discover that all the fruits look alike. Which can trigger a discussion about how people are similar on the inside.

I am not standing here on a soapbox. I am looking up to the heavens, aching for something concrete to do in the face of a mind-boggling tragedy. Instilling tolerance in our children is one key way we can better their future and this country's—and pay tribute to the Pulse 49.