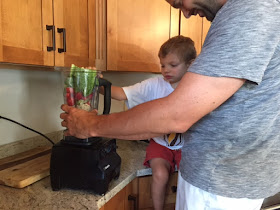 This guest post is from Tony Bombacino, who with his wife, Julie, cofounded Real Food Blends. They make 100-percent real food meals for kids and adults with feeding tubes. When he isn't working or chasing the kids around the house, Tony enjoys cooking, fishing, traveling, golfing and cheering for the Bears, Cubs and Bulls.

George Bernard Shaw once said, “There is no love sincerer than the love of food.” I grew up in a big Italian family that definitely subscribed to this belief and lived it to the fullest. My childhood and the years after are full of memories of my grandparents, Dad, aunts, uncles and cousins cooking, sharing recipes, celebrating great food—and of people telling me, “Anthony, you gotta eat something!” (I wonder why nobody tells me that anymore?!) It’s no wonder, then, that when I became a father I was beyond excited to pass on the love of cooking, share recipes and family traditions in the kitchen and make more memories with my own kids.

I never imagined my only son would never taste my cooking or be able to eat by mouth.

Anthony John Bombacino III (“AJ”) was born on March 20th in 2011. By this time I was blessed to be the dad of a healthy, beautiful, caring daughter (Luca Jane) who loved to spend time in the kitchen with Daddy as I made her lasagna, meatballs, Sunday “gravy” (aka red sauce), chicken noodle soup and more. This was my first and only son, my boy who would carry on the family name, and of course, help his sister carry on our family traditions.

AJ was a little small when he was born, but we were home from the hospital in a couple of days and he was thought to be 100 percent healthy. For the first six months of his life he was breast fed, growing and seemingly “normal.” But then, AJ had a 45-minute seizure while visiting family in Ohio, seemingly out of the clear blue. He was rushed to the hospital to be stabilized and analyzed. Fast-forward through brain MRIs, sleepless nights in the ICU, an ambulance ride back to Chicago (closer to home) and many confusing conversations with doctors. We were told AJ had been born with serious brain malformations and that he may never walk or talk. My wife, Julie, and I were in shock.

After a few days we returned home, still in shock and very uncertain about AJ’s future. We had no idea what was coming next. AJ would go on to have more seizures over the next few months, and started having other issues, one of which we thought was bad acid reflux. No biggie, right? Wrong. One specialist suggested a swallow study to see if AJ was aspirating food into his lungs. My wife and I were sure he would pass and it would be fine.

This test was on a Friday. We would not leave the hospital until the following Monday, 72 hours later, when AJ had surgery to get a feeding tube (G-tube). We had no idea what it was, what it meant for AJ’s life or our own, if it would be permanent or temporary, what or how he would “eat” or anything. We didn’t know what we didn’t know. Fear and sadness set in.

Imagine this guy who grew up living for food, loving to cook and wanting nothing more to share the kitchen with his own son someday being told that his son now had to be 100 percent fed through a feeding tube. I was still trying to process all the other stuff about my son’s brain injuries and what his future may or may not be, and my love for food turned to anger over my son not being able to enjoy the great meals and memories I had as a kid.

Like we all have to, my wife and I quickly pushed fear and sadness to the side and focused on learning and action. AJ didn’t do so well on the steady diet of formula (which is often heavy on corn syrup and synthetic ingredients and light on real food) that is typically prescribed to tube-fed kids and adults. He vomited many times per day, not sleeping, not growing and not happy.

Julie lead the charge to learn about other options for feeding my son. We thought and hoped there had to be a better way. After reaching the point of desperation, we finally went against the suggestions of our doctors and dietitians, bought an expensive Vitamix blender and began blending real, nutritious food for AJ at home.

We started with the basics, stuff we thought everybody eats or could eat—chicken, ground beef, kale, carrots, spinach, quinoa and the like. As we learned more about what did and didn't blend well, we realized that AJ could have almost anything we were eating as he doesn't have food allergies and seemed to enjoy most things, like his mom and dad. This meant he could enjoy leftover Mexican food (think carnitas) and Italian food (pasta and meatballs), and be involved in our family food traditions. Yeah, real food! Julie also got AJ involved in our meal times, either seating him on the kitchen floor or in one of his special high chairs so he could be around us as we were cooking and blending.

AJ's vomiting and irritability improved almost immediately. He began to gain weight, his skin color improved and I started to feel like we regained some stability and control. I began to love food again. 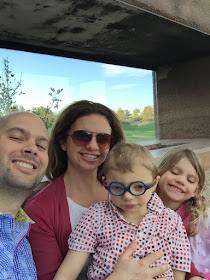 Blending AJ’s food was a different, but rewarding experience, than cooking. Different in that I was usually the head chef for most of our family meals and my wife the world’s best sous chef. With AJ’s blended diet and blending, Julie became the head chef, leading the charge to come up with new and nutritious blends, an interesting and often hilarious journey (ceiling and walls can quickly look like a crime scene if you don’t hold the cover on the blender tight enough)! I learned to become her sous chef, cooking ingredients, chopping, getting things set in the blender and sometimes blending and putting into freezer bags. It was a learning and growth opportunity for all of us, including Luca who eventually helped, too.

After blending meals for AJ for months with great success, we were preparing to take a trip to Disney with the kids. This would be the “aha moment” for what would become Real Food Blends. Before we left, Julie and I were stressing about having to pack the blender, grocery shop for ingredients for the blends, find time to blend and on and on. It seemed more like work and less like vacation. We wondered if there was a pre-packaged, shelf stable, blended real food meal option that we could buy and bring with us. There wasn’t, and in the middle of our desperation to give our son better nutrition and to improve the realities of our new life, we were crazy enough to go for it. 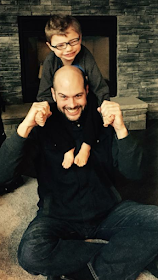 Driven by our Chief Inspiration Officer (AJ), we raised money from friends, family and angel investors, and assembled a rock star team of consultants to help us come up recipes, source ingredients, produce meals and distribute them around the country. We currently offer three different meals (soon to be four): Salmon, Oats and Squash; Orange Chicken, Carrots and Brown Rice and Quinoa, Kale and Hemp. They’re sold through our website, a nationwide network of home healthcare companies and DMEs (durable medical equipment companies). Our meals are covered by insurance in many cases, and are now on the formularies of leading hospitals like The Cleveland Clinic and Mayo Clinic. It’s still a bit surreal and hard to believe how far we have come over the past five years. 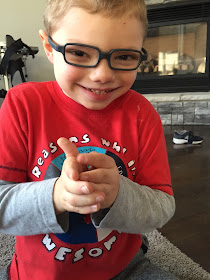 Our adult customers and pals tell us they feel more satisfied with our blends, and experience less stomach pain and less reflux as our meals sit like...meals! Formula is almost the consistency of water, whereas our meals are a thicker puree—so they are still thin enough to fit through the tube, but sit in the stomach like a meal. Caregivers say they feel much better knowing they are giving their loved ones real food instead of giving them the same thing over and over again, with no real connection to "food" or what the rest of the family is eating.

This past weekend I made a ton of meatballs, Italian sausage, pork ribs, rigatoni and a huge pot of my homemade "gravy." AJ is getting that in some of his blends this week, along with Real Food Blends. Best of both worlds for this little guy! Although my food experiences with AJ are much different than I would have ever expected, I've ended up being exactly where I’m supposed to be—with more blessings and joy than a dad could ever hope for.

I’d love to hear your thoughts on this topic and continue the conversation with you. Email me at SpecialNeedsDad@RealFoodBlends.com. 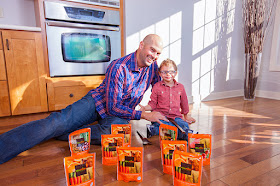