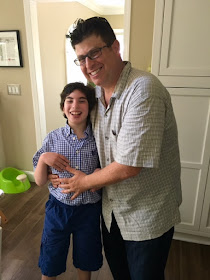 Ben has been saying "Da! Da! Da!" a lot lately. I'm enchanted by his language development, especially because I still remember how much I ached for Max to babble when he was a baby. I'm wondering if Ben is going to say "Daddy" before "Mommy"—Dave and I have a friendly competition going on. Then I discovered that Max is aiding and abetting Dave.


I am not surprised that Max wants Ben to say Dave's name first; Max is a Daddy's boy. He and Dave regularly go out on weekends to eat or for adventures (involving eating). And so, Max had big plans for Father's Day—he wanted to take Dave to see Finding Dory at a nearby theater where they serve food as you watch the movie.

Max decided to wear an Oxford shirt, just like Daddy usually has on. Then he asked me to dab on some of Dave's cologne and use some of his hair gel. Dude!


When Max was little, I don't know that I ever thought the day would come when he and Dave would be out and about like any father and son. For starters, Max was fearful of going to new places. He didn't see a movie in a theater until he was 10 (Monsters University, a day I'll never forget).

I also couldn't imagine that he and Dave would have conversations—real conversations—and that they would spend so much time together. Not because Dave has to look after him, but because he truly enjoys his company. And trying new restaurants together, of course. Bonus points if they have a fire truck theme.

It wasn't that I didn't think Max had the potential. But when I was in the thick of Max's developmental delays, I was looking for the next immediate physical or cognitive advance—speaking a consonant, walking up a step, reading a word. Dreaming that he would someday grow up and hang out with Dave, just two guys out to have fun, wasn't even on my radar.

So when I watch them head out and Max says "See you later, Mommy!" I feel a burst of happiness every single time. 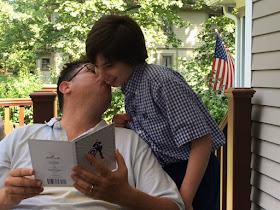