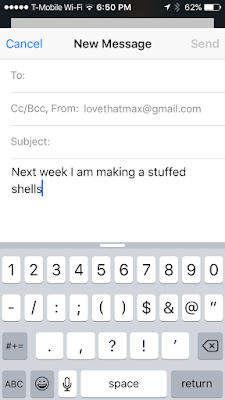 I was working in our bedroom when Max got home from school yesterday. He came upstairs and told me something. I had no idea what he was saying. I asked him to say it again, then again. No luck. His iPad with the speech app was downstairs in his school bag, but Max didn't want to get it—he wanted me to understand what he was articulating.

This has been happening a lot lately. Max used to repeat a lot of the same phrases (like "I love purple!" and "Take me to the car wash!" and "Bowling is my favorite sport!" and "I want to be a fireman when I grow up!") But these days he's got a whole lot more to say, which means new words and new phrases, ones I can't always understand.

Still, Max has been making progress with speech. After last year's IEP, where his speech therapist noted—much to my alarm—that she didn't feel articulation should be a focus since she hadn't seen much improvement, it was very satisfying to read "Max demonstrates some improvement with the intelligibility of his speech over the past year" in this year's IEP draft. She noted that his sound inventory now included h, g, m, d and n, although inconsistently. Other people have been noticing that Max is sounding clearer, too.

Happily, Max's ability to communicate by typing has also been improving. When he realizes that Dave, me or Sabrina aren't getting what he's trying to tell us, and his iPad isn't around, he'll type out what he's saying on one of our phones. If he doesn't know how to spell a word, he'll approximate it.

As it turns out, Max was informing me that he'd be cooking stuffed shells at school this week, his favorite dish. Over the weekend, we took a special trip to the supermarket to buy the pasta, which he promptly put in his book bag when we got home. He found a recipe online and sent it to his teacher. They do cooking in his class, but I am not entirely convinced Max didn't cook up a stuffed shells fantasy and drop some pretty big hints.

Sometimes, Max surprises us with his speech. This weekend I was taking a video of Ben loving his bouncer when Max did a videobomb and pronounced Ben's full name really clearly, the best we've heard yet. It was one of the only times I've ever heard him spontaneously say a "b."

Speech is one of Max's biggest challenges, and articulation advances are hard won—exactly why we get so giddy when they happen. Max is on his own timeline. He may be getting older, but he has as much potential as ever. We'll take every sound, every consonant, every phrase and every sentence as they come.