The situation with holding the baby 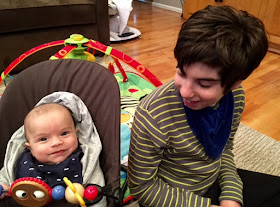 Max walked into my bedroom yesterday morning because he heard the baby fussing. Dave was away on business, the baby had been really irritable because of his stomach issues for a good part of the night, and I was exhausted.

"Hi, Fireman," I said, wearily, as Ben fidgeted on my shoulder.

I asked if he'd go see if Sabrina was up, because she likes to hold the baby in the morning as I attempt to make like an awake human being.

He came back and said no. Then he grabbed the burp cloth off the bed and tried to sling it over one shoulder, except it didn't land right so it hung off him. He looked at me, expectantly.

He wanted to hold Ben.

Part of me adored his instinct to help—Max is always like that. He really and truly cares about making sure Dave, Sabrina and I are all right, exactly why he regularly asks if we're OK. Lately, he wants to know whether I had a good day. When he came home from school last week and I told him that Ben had spit up a lot, he noted that Ben had a bad day.

Part of me loved his confidence in his abilities.

Part of me felt sad. Sometimes, while Max is sitting, he'll hold Ben on his lap but his arms aren't coordinated, limber or stable enough to be able to hold Ben against his chest in a standing position. It's too precarious for Dave or I to help Max do it.

We try our best to further Max's physical abilities. Either we're trying to break new ground (swimming), finesse stuff he's good at (climbing stairs) or assist him. Rarely are we ever in a situation where we have to tell Max that he just isn't able to do something. But I had to.

So I said, straight up, "Max, you can't hold Ben yet standing up, but you can hold him while you're sitting."

I said "yet" because perhaps Max will someday hold his baby brother while standing, even if Ben's no longer a baby by that point.

Max enjoys helping with Ben in other ways; he brings dirty diapers to the trash, dabs the spit-up off his face and stands over him and chants "It's OK! It's OK! It's OK!" when Ben is wailing. Still, I felt badly that that Max was missing out on being able to walk around with Ben, something Sabrina loves to do. It was one of those why-can't-Max-enjoy-the-same-things-we-do pangs that strikes occasionally. Mostly, I see his abilities, except for those times when he gets frustrated by not being able to do something...or I feel that way for him.

A few minutes later Sabrina meandered in. She and Max stood over the baby and made silly sounds at him, as adoring siblings do. Ben beamed at them. And just like that, the morning got happier for us all.
Ellen Seidman at 6:38 AM