He's going to show little kids a thing or two 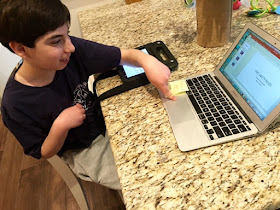 In a couple of weeks, Max will be making a presentation at his school about fire safety. It's his good deed project for his bar mitzvah; I crowdsourced ideas for it here last April, and that was the winner. (So many thanks, Anonymous, whoever you are!)

Max's school speech therapist made a suggestion: He could string sentences together on his speech app, and then I could put help them into a PowerPoint that would run simultaneously. In the last couple of weeks, we've been working on that and shooting photos and videos, too. Max is so excited.

At first, he was going to present it to his classmates, but another teacher at school suggested doing it for kindergartners. Max's peers have heard firefighters make these presentations, but not the little kids. A firefighter from a local station, Mike, will be in attendance; the guys there regularly do presentations at school. I am sending Mike the PowerPoint ahead of time to make sure it's OK.

Max and I had a little debate about introducing himself as Fireman Max. I wanted him to write, "My name is Max and I like to called Fireman Max." He wants the presentation to read, "My name is Fireman Max." I explained to him that little kids might get confused and think he was a real fireman, at which point he gave me a get-a-grip look and noted that he is a fireman. Really, there is just no arguing with that p.o.v. We'll see if it flies with Fireman Mike.

Max is psyched about this because: fire! Smoke! Firefighters! Safety! But it's also clear to me that he is eager to share what he knows with the kids. It's a real confidence booster. Who knows, maybe this could lead to him doing presentations in other schools or settings.

Meanwhile, I will be watching Fireman Max's Fire Safety Rules several times a day for the indefinite future and hearing "Stop, drop and roll!" in my dreams.