Tommy Hilfiger makes clothes for kids with disabilities, thanks to a mom's dream 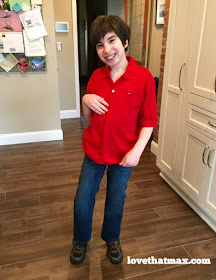 Say you have a child with a disability who has challenges using his fingers and hands. It's been a long haul helping him learn to feed himself, hold a cup, maneuver a toothbrush, grasp toys, turn lights on and off, use a TV remote control and twist doorknobs, among other manual tasks. Thanks to lots of practice and even more determination, your child can now do these things. Not with ease, but he manages. And yet, there is one key life skill that eludes him: dressing himself.

When your fingers don't do what you want them to do, buttons, snaps and even zippers can be tough to manipulate. Your child is frustrated by this lack of independence. Therapists at his school put fabric loops on sweatpants so he can pull them up and down, but have no suggestions for how he can put on his own shirts.

That child is my Max, who has cerebral palsy. And as of this week, he's gained some dressing independence because Tommy Hilfiger has launched a line of adaptive clothing, available on Tommy.com. It's the first designer adaptive clothing, and it's due to the efforts of fashion designer Mindy Scheier, founder of the nonprofit Runway of Dreams. Her muse: Her 11-year-old son, Oliver, who has a rare form of muscular dystrophy. Mindy and I have a connection through a program our children attend, Friendship Circle, and she brought over samples for Max to try.

This is a Big Deal for children like Oliver and Max, their parents and the fashion industry in general. It's the first time a major clothing line, let alone a designer one, has created clothing for people with different abilities. The collection includes 22 pieces for boys (sizes 4-20) and girls (sizes 4-18); the tops, pants, jeans and dresses are adaptations of other styles on Tommy.com. They have magnetic closures instead of buttons, adjustable pant legs to fit foot braces and adjustable sleeves. 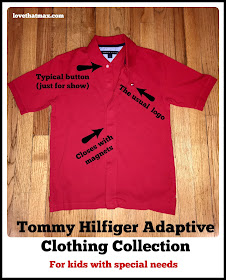 Based in Livingston, NJ, Mindy's designed for Bloomingdale's and Saks Fifth Avenue. Over the years, she's adapted clothing for Oliver. Her aha! moment came came when Oliver wanted to wear jeans to school like his friends were. Problem was, they wouldn't fit over his leg braces, plus the button and zipper wouldn't have been possible for him to manipulate by himself during bathroom breaks. "I didn't even have the words to tell him he couldn't wear jeans to school," she recalls. "It was very upsetting to me." But she did have the sewing skills. She altered jeans to fit his leg braces, then stopped at school during lunch hour to help him use the bathroom.

That's when Mindy decided there was no reason Oliver and kids like him couldn't wear whatever they wanted. She started Runway of Dreams in 2013, with the mission of working with the fashion industry to adapt mainstream clothing for the differently-abled. She spent her first year doing surveys and focus groups with parents and kids to assess the needs of the community. Besides cerebral palsy, having Down syndrome and autism can also affect fine-motor skills and the ability to fasten clothing.

Using clothes from Kohl's, Target and Wal-Mart, Mindy had samples made up with MagnaReady magnets as closures (founder Maura Horton has a husband with Parkinson's disease). She showed the clothes to Global Brands Group, which makes children's wear for Izod, Calvin Klein and Tommy Hilfiger. And that's how Runway of Dreams became a reality.

Given that nearly one in five people in the U.S. have a disability, according to the most recent U.S. Census Bureau data, it may be hard to believe that until now no big manufacturers have created adaptive clothing. But the truth is, often people just don't get it unless they know someone with a disability. "I've been in design my whole career and only after I had Oliver was I privy to issues I never knew existed," says Mindy. "It takes a big mouth to help the industry understand this is a community that has not been served." Perhaps Tommy Hilfiger gets that more than other designers would, given that both he and his second wife, Dee, each have children with autism, and Tommy has done a PSA for Autism Speaks.

The time is ripe, she continues: "With Lego coming out with a figure in a wheelchair to models with disability walking down the runway, our culture is ready for this to happen." Mindy even trained the Tommy Hilfiger customer service team, explaining how to talk about children with different abilities. "Everyone there is saying they've never been more proud to work with their company," she says.

Oliver participated in the shoot for the Tommy Hilfiger website, along with six other differently-abled kids. "He's just so excited to have other people wearing what he's been able to wear," she says. "When we were in the middle of the shoot, Oliver looks at me and says, 'You see, Mom—if I didn't have muscular dystrophy, we wouldn't be here!' I said, 'You're right!'" 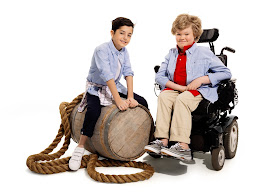 Mindy's already designed two more collections for Tommy Hilfiger, who made a donation to Runway of Dreams. They're in discussion about expanding the clothing to retail stores, and creating a line for adults.

Tommy Hilfiger Adaptive Clothing is the same price as the brand's standard children's styles, something Scheier pushed for. "I didn't feel our community should have to pay more," she says.  "It's a huge testament to Tommy, he absorbed the extra costs—the cost of a magnet is significantly more than a button." Some parents won't be up for paying designer price tags (the cost of the red shirt is $29.50). But Mindy's just getting started, and is in talks with other brands and retailers. "My dream is that there's adaptive mainstream clothing for every person out there whether you're shopping at Walmart or Saks Fifth Avenue," she says.

Max and I were both excited for him to put on the clothes. The jeans size we got was small at the waist for him, so he tried the snaps with the jeans off and could open and close them with some fiddling. 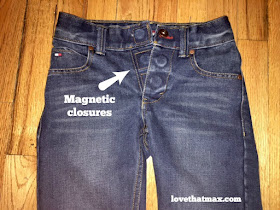 I knew Max wouldn't be able to slip his arms into the polo by himself, even though the fit and material were nice and loose, because he's not yet able to move his arms that way. But the magnets made it feasible for him to close the front. They're powerful, and are drawn to each other with just a nudge; as they connected, they made an encouraging "click!"

Maybe some people watching this will see a boy struggling to put on a shirt. Me, I see only success. This is the first time in Max's life he has closed a top by himself, and it was only his third attempt. I love how the adaptive shirt enabled him to do a task that's previously been impossible. It was one little click of a magnet, one big move toward independence.

Clothes like these will be a game-changer for our kids. Not only will they have more autonomy, they'll better fit in with their peers, given that the clothes have the usual cool, crisp Tommy style. As Mindy says, "When you put on something that you feel good in, it affects your confidence and self-esteem." 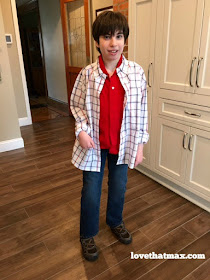 Images from Tommy.com: Richard Corman. Image of Mindy and son: Runway of Dreams
Ellen Seidman at 8:00 AM