A shopping cart for kids with disability, now at Target 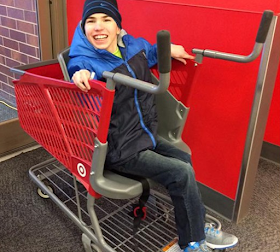 Special needs parents everywhere have been psyched to hear that Caroline's Cart, a shopping cart with a large seat on the front for kids and adults with disability, is going to be in Target stores nationwide. And there are two great stories behind this.

The company's been testing the carts in stores since early 2015; starting March 19, the majority of Targets will have at least one Caroline's Cart, and some will have more. Says mom Brianne Fuller of Brighton, Michigan,  whose boy is pictured above, "It made our evening shopping trip a breeze...and my son LOVES it!"

The cart is named after the daughter of Drew Ann Long, who has Rett syndrome. When Caroline was seven years old, Ann realized she'd soon outgrow the typical shopping carts. Drew Ann designed the cart, applied for a patent and roped in pros to help it come to life. Today the cart can be found in supermarkets, shopping centers and malls around the country and in Canada.

Some more awesome: The idea to bring Caroline's Cart to Target came from a Target team member who has a child with special needs, and suggested it to Store Operations.