Who's the boss? Max 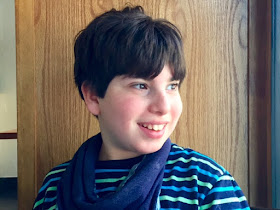 "Sabrina, upstairs now!" Max commanded last night. He wanted her to pack for Disney World. Usually, Sabrina's the bossy one, especially when it comes to Ben ("Max! Don't breathe on him! You have germs! Daddy! Wash your hands before you pick him up!"). Now Max is discovering the joys of taking charge.

This has been making my life a little easier, as I don't have to be Ms. Naggypants if Max is urging everyone to do their thing. When getting out of the house takes forever, there's Max telling everyone "Let's go!" Not only is he on top of things, he's definitive. When we can't decide where to have Sunday dinner and it's getting late, Max will say "Sushi!"

Max has always known what he wants, even if he didn't have the words to express it. When he was little, he was able to communicate his desires and needs by pointing at photos I assembled in a binder, organized by categories including food, drinks and toys. Then we graduated to illustrations. Then came the Dynavox, his first augmentative communication device that enabled him to press on images that would sound out words. Since 2010, he's been using the Proloquo2Go speech app. The creators filmed a video of him using it at school two years later, titling it "It really has become his voice."

These days, Max is increasingly articulating words in his new role of Commander in Chief. I especially love it when he comes to my defense. If Dave is looking through the mail after he gets home from work and I am sitting on the couch in a daze, fried from taking care of Ben (see: Profile of an Anti-Napping Baby), Max will tug at Dave's sleeve and say "Help Mommy!" Should Dave linger, Max will add, "NOW!"

I think I need to get him on the phone with the insurance company about those AWOL reimbursements.