The hardest question to answer 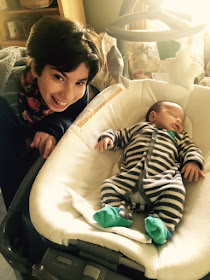 "Did I have a playmat when I was a baby?" Max asked me yesterday afternoon, when he came home from school and I was playing with Ben. He's been asking these sorts of questions since his little brother was born. Typically, he points at the object, makes a motion of rocking a baby and points to himself.

Max has wondered whether he had a car seat when he was a baby, whether he cried a lot, whether he made big poops. His whole face lights up when he hears that, yes, he used to be just like Ben—or rather, Ben is just like he was. I'm not sure why he's asking. It might simply be Max putting together the pieces of who he is.

In the evening, I was holding Ben and he was making cute sounds. Max pointed to the baby then he pointed to his mouth. He was asking if he had made sounds like that when he was a baby.

I got choked up. Because, no, Max hadn't. There were no sweet coos when I held him, no gurgles from the back seat when I drove him around.

The silence was painful. I knew Max was at risk for not talking because the stroke he had at birth damaged the part of the brain that controls speech, and I was desperate to hear him babble, a precursor to speech. Once—once—when Max was Ben's age he made a sound while I was driving him to a therapy appointment, and I got so excited. I can't remember the sound which is weird because it was monumental at the time. I thought it was the start of something. But, no. He never goo-goo-gooed or ga-ga-gahed..

I didn't want to tell Max he hadn't made sounds like that as a baby; I didn't want him to think anything had been wrong with him. In retrospect, I wish I could have been straight up and made it part of our evolving conversation about cerebral palsy. At that minute, though, I was floundering in sadness that had unexpectedly surfaced and I didn't want Max to see me upset. So I swallowed hard and said, dodging the question, "Max, you smiled and laughed a lot when you were a baby!"

I've thought about it. When the answer is "no"—Max never did hold a bottle, for one—I can explain why. Because the cerebral palsy made his muscles tight his hands were in fists most of the time, so Daddy, me or the babysitter held the bottle for him. But I'll also be able to say that as he got older, he learned to hold a cup, and he's gotten really good at that.

And when the answer is "yes," as a baby Max did do things Ben does, I can make it a point of pride that he did them his way. And maybe I'll get down on the floor and show him how he commando crawled, using his arms to propel his torso like an army solider in combat.

I want Max to feel so good about his accomplishments. I want him to understand that even if he  didn't do the things Ben does or do stuff exactly the way Ben does, he's always been an incredible boy, then and now.
Ellen Seidman at 6:36 AM