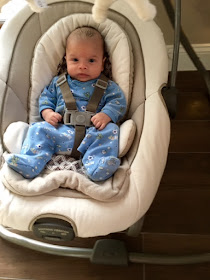 Sabrina calls Ben "Mooshie." Max calls him "En." Dave calls him "Benjamin" and sings nonsensical songs to him like "Benjamin, Benjamin, you're so cute, you should eat lots of fruit." I call Ben "Pookie" and "Yummy boy" and, when I'm at wit's end, "Mr. Spit Up von Fussypants."

I've been trying to be valiant about Ben's spit-up issues and fussiness. He's a healthy baby and I've felt that I have no right to gripe. I went through hell that first year of Max's life; this is just stomach upset, I've been telling myself.

When I brought Ben to the pediatrician's a month and a half ago because I was concerned about weight gain, it became clear that packing on pounds wasn't a problem (he takes after me in that department). The doctor put him on Pepcid to help relieve distress. It's helped some, but he still gets fussy and spits up frequently and voluminously, even hours after he's been fed. Ben can drench  several burp cloths in one feeding. One weekend I was so desperate for extra burp cloths that when a mom offered me some really nice, plush ones that had the name "Miles" embroidered on them, I gladly took them, so some days he's Miles Spit Up von Fussypants.

People and some doctors like to say that spit up is a laundry problem, not a medical condition. But it's mentally draining, especially when you have a baby who's not into napping. My day is a blur of feeding, burping, changing diapers and wet outfits, cleaning spit up off the floor/sofa/chair, walking Ben around to console him and putting him down to nap only after ten minutes, he's up.

I'm fueled by the fact that Ben's getting bigger (even if it feels like I'm accomplishing nothing during the day) and his smiles and coos (favorite phrase: "A-goo!"). 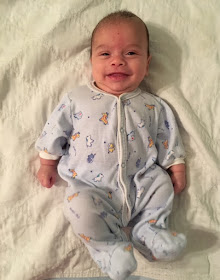 But then: There are times when I want to just curl up in a ball and hide under our bed comforter, because I am strung out and wish I could transform Ben into a baby who eats and burps and then he's done.

I'm doing the right things: I put him in an upright position when I nurse him, burp him often during feedings, keep him upright for 20 minutes afterward, let him nap in our Fisher Price Rock 'n Play Sleeper (which has an incline) and do shorter feedings so he's not overfed. I've also cut back on dairy and caffeine in my diet. Nothing's helped.

I posted about this on a local Facebook group and got a whole lot of advice, including burping before feeding and giving him BioGaia ProTectis probiotic drops (ordered them). A friend who's a lactation consultant stopped by, checked his mouth and said he has both tongue and lip tie. When I spoke with the pediatrician, though, he says he only refers babies for a tongue tie procedure if they're having issues nursing and aren't gaining weight.

"Babies usually grow out of reflux between six and twelve months," the doctor told me, and he meant to be reassuring but that sure seems like a looooong time to deal with this.

Sometimes, as the baby spits up for a third or fourth time when I'm feeding him (and by "spit up" I mean the stuff pours out his mouth, down his outfit and off the sides of his neck) and I'm upset because Ben seems uncomfortable and because all that milk is going to waste, I think back to the early days with Max. I was constantly shuttling him to therapists and specialists, massaging his limbs, doing exercises the therapists recommended and crying a lot in the shower. Max wasn't a good nurser because he had oral motor issues, and a feeding session could take a good hour.

When I consider all that, I think of how lucky I am that Ben's basically OK. He has stomach issues; Max had a stroke. This is why I haven't really discussed the spit-up saga with friends or family (see: "no right to gripe"). But this weekend, my sister was visiting and saw what was going on.

"No, he's not," I said, and relief flooded through me because it felt good to acknowledge.

A little later, as I changed Mr. Spit Up von Fussypants' spit-up drenched outfit, he beamed at me—one of those big smiles where I could see the dimple in his right cheek. I smiled back, and grabbed a burp cloth to catch the spit up.
Ellen Seidman at 6:38 AM