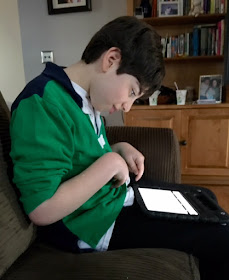 Max is fond of making lists. One of his first, years ago, was a list of what we all liked to drink (Mommy: Iced coffee. Daddy: Hot coffee. Sabrina: Orange juice.). That was followed by what everyone likes to eat. He used to have Dave, me or our sitter write them out for him.

Things have changed. Max is still creating lists, only now he's typing them out himself on his iPad. Last year, when he and Dave went on a joy trip to Chicago, he made a list of what they'd do there. He's also made a long list of his favorite things (color: red; movie: Planes Fire and Rescue; sport: bowling). Before his bowling alley birthday party this year, he made a list of all its components, down to the red punch that would be served.

I'm psyched about his list-making because it shows real progress with spelling and creating sentences, plus it's an entertaining activity that does not involve TV or YouTube videos of fire trucks. Max enjoys lists, I think, because it makes him happy to lay out the good stuff in his life. That way, he can refer back to a list and keep relishing things again and again (and again). Blessedly, he's usually content to sit at our kitchen table and read to himself or make additions and changes, so I am not forced to endlessly hear "I love fire truck number 31."

I could definitely take a lesson from Max. My lists typically contain highly non-entertaining notes such as "Tell electrician outside light by garage isn't angled right and not turning on when we go to garbage shed." (Actual note in my iPhone!) (If I shared more excerpts, you'd promptly fall into a deep sleep.) (Hmm, maybe I should start reading my to-do lists to Ben.)

Inspired by Max, as Mr. Spit Up von Fussypants took a nap (for a whole 15 minutes) yesterday, I made a list of awesome things about Ben. I mean, obviously I know them but seeing them laid out gave me a lift. OK, so I listed almost every single body part. (Those lips! Those chubby-and-getting-chubbier hands! That baby pot belly!) But also, the special coos Ben has for me, the way he breathes heavily when he's excited and how he holds one fist in the air but doesn't know what to do with it.

Most recently, Max made a list about his trip to Disney World next Thursday. It's a surprise birthday present from me and Dave, taking place a month later because you can get pretty good deals in January if you are willing to pull your kids out of school for two days. Dave, Max and Sabrina are going and me (aka Cinderellen) and Ben will be left at home to fend for ourselves. It'll surely give me time to make a list for Ben about the many benefits of napping.

Max is, most of all, eager to recreate the magical experience we had the last time we were at Disney. Which is, we saw a lion take a dump during a tram tour in Animal Kingdom. "See lion make big doodie" made it onto the top of his list, along with staying at the Animal Kingdom Lodge and eating stuffed shells (his current food obsession).

Max's music therapist accidentally erased his list during their recent session, and together they started a new one. When I saw it, I was awed to see that he'd added yet another activity: drinking pina coladas. 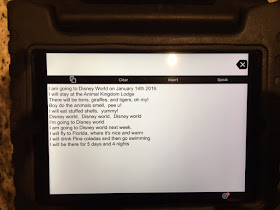