Your child with special needs will surprise you: an inspiring story 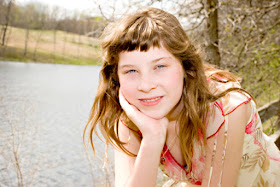 This guest post is from Dawn Marcotte, a Minnesota mom of two girls including a 16-year-old on the autism spectrum and, she says, "a 10-year-old who wants to be just like her big sister." After struggling to get a proper diagnosis for her daughter, Dawn launched ASD-DR, an autism resources site to help families. As her daughter has gotten older, she notes, the focus has shifted to helping teens and young adults live up to their highest potential.

How do you feel about public speaking? How about improvisational performing?

So when my 16-year-old autistic daughter recently that she had been asked to speak on a panel at a local anime convention, I was surprised and delighted and terrified all at the same time.

Perhaps I should explain first.

Recently there was another anime convention here; this would be our fourth now. This time A. and her little sister S. dressed in full costume from one of their favorite shows. They wore wigs and costumes they designed themselves, and even had props to carry around all day. They looked fabulous.

Their dad dropped them off. When I picked them up that evening they were bubbling over with excitement. A. had been asked to participate in a discussion panel happening the next day as a guest panelist. (She was dressed as a character they were missing from the panel.) She agreed, even though that meant she would be on a stage in front of actual people. She would have to talk to them and answer questions.

This would be the first time she had ever had to speak in front of a group like this. She was terrified and excited and then terrified again. It wasn't like she had a prepared speech or anything; she was going to pretend to be her character and answer questions about the show as if she was that character. I think that fact, more than any other, allowed her to agree to this new experience.

When we arrived the next morning, she was nervous but had been thinking about her character all night. She took a moment to get into character and truly enjoyed it. As the character of America she got to exploit her knowledge of all the stereotypes of Americans and be as snarky as only a 16 year old can be. She got many laughs from the audience.

I was absolutely amazed at her performance, and so proud. A. didn't hesitate to answer and was always ready with a retort for anyone who asked a question. This was nothing like the forced conversations we practiced when she was younger. She always struggled to talk about what she did that day or to participate in the give and take of a normal conversation.

The weekend had more surprises in store.

After the panel was finished, she was invited to participate in yet another panel because the organizers said she was “hysterically funny.” (She was.)


So why am I sharing this with you?

Because I want to give other parents hope.

I remember when A. was six years old and the autism diagnosis was fresh. We spent so much time and energy on her that we were overwhelmed. There were times when just getting through the next minute felt like a victory.

When she was younger, A. had a lot of trouble expressing how she felt and when she was becoming overloaded with sensory information. As a result her behavior was her best method of communication. There were many times when the world was so overwhelming that she simply melted down and was inconsolable. She could only scream and cry and weep until exhausted.

During this time thinking about life in a month, let alone a year, was more than I could do. Reacting to whatever situation had happened that day took all of my time and energy. I could never imagine what she would accomplish.

Then it was middle school and starting with a whole new set of teachers and administrators to make sure she got the help she needed.

My days consisted of arguing with A.  Puberty seemed to undo so much of what she had worked so hard to learn. But we survived it all and launched into high school. That was where A. was introduced to Japanese cartoons, otherwise known as anime.

She found her tribe.

I think my favorite quote from attending one of these conventions was from a professional voice actor who said, "Congratulations to everyone here. You aren't afraid to wear your freak on the outside."

He was right. The people who attended were not ashamed of loving something that a large portion of the population is not even aware of. They wore costumes and talked about characters with the same enthusiasm and passion that some people have when talking about sports or politics.

They don't care who you are, or where you are from or what you look like. If you like anime you are welcome. This level of acceptance is hard to come by for anyone, but even more so for kids who are on the spectrum.

My daughter was in the thick of it too, talking to people she had never met before and even making friends. She has since met with these new friends and is planning on seeing them again later this month.

Now I know that every child is different, but I want other parents to know that their child—no matter who they are or what they struggle with—can accomplish things you never imagined.

If we are open to opportunities, willing to think outside the box and try new things with them, our kids can have a future they find fulfilling.

So take a deep breath.

The future is out there, and it just might be wonderful.