And then my head exploded at the pediatrician's 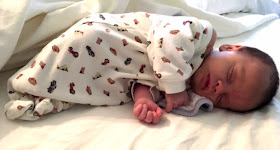 Ben likes to eat a lot, which is no surprise given that he's my child. Unlike me, though, he isn't obsessed with sushi and he spits up frequently and voluminously. This is unnerving because I'm nursing him, so I've had no idea if he's retaining enough. Plus he always seems to want to eat—he nibbles on the washcloth in the bath tub, burp cloths or anything located near his mouth—which has made me further wonder whether he's satisfied.

I was pretty sure that he was gaining decent weight, especially in his chins. 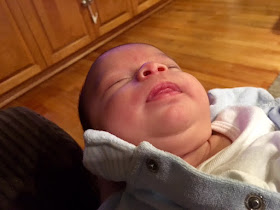 But the poor little guy generally has stomach distress; he gets fussy after he eats, and lets out burps for up to an hour or so afterward. Sometimes he gets these hiccup-burps that make his entire body shake. I've fed him sitting upright, burp him frequently during feedings and keep him upright after, too, but nothing has helped.

Dave has been serving as the resident baby worrywart in our house (as you may have noted), but I wanted to make sure Ben's stomach issues weren't serious. When I called the nurse at the pediatrician's office, she decided to make an appointment for him to see the doc. I noted all my concerns about his eating on my iPhone, because I didn't trust my sleep-starved brain.

At the pediatrician's office, I gently placed Ben on the scale. The nurse did a double take. In three weeks he'd gone from six pounds, 11 ounces to nine pounds.

The doctor came in. "Wow, that is a lot of weight he gained!" she noted. "Are you nursing?" I nodded.

So then I read her my list of concerns, including "Spit-up sometimes flows out of his mouth like lava from a volcano."

And the doctor listened. And she gave him a good look over. And she basically said that he was probably ingesting a little too much milk at one sitting and suggested that I try to feed him more often, but maybe only give him one boob at once. That seemed reasonable.

And then, suddenly, worries came pouring out of me like lava.

What was that dry patch on his forehead?

How about the little bumps on his nose—would they go away?

His legs seem a little stiff when I change him, are they OK?

His eyes kind of tracks my face when I move it but then he loses interest, is that OK?

He's not so interested in staring at the mobile, is that OK?

I hadn't planned to ask any of that stuff. It was like because she hadn't found anything wrong with Ben, I needed to make absolutely, positively sure. Twelve years after going through NICU hell with Max, I still couldn't believe I had a healthy baby.

She answered my questions patiently. Everything was normal.

We came home. Ben was hungry. I nursed him, burped him, dabbed the spit up. I strolled around the house, with him on my shoulder. He was fine. I just had to believe it.
Ellen Seidman at 6:35 AM