When my son communicates, will he share our secrets? 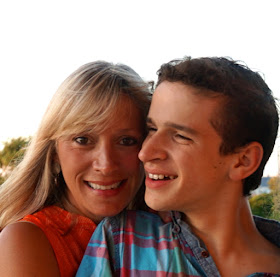 This guest post is by Jesse Torrey, mom to Anna, 15, and Jack, 17, who has a rare disease that's caused speech loss and other challenges. Jesse blogs at Smiles and Duct Tape, and recently finished a book by the same name. This summer, she read a post at a Listen to Your Mother performance. As she notes, Jack's condition "has managed to take a lot from our family, but Jack never has lost his sense of humor or his beautiful smile. That's the 'smile' in my blog title. The duct tape is all the other stuff we need to hold our family together—family, friends, doctors, teachers, community, adventures, wine, etc."

For years, I’ve dreamed of hearing my son, Jack, speak. I’ve pictured it clearly enough that I’ve felt the words as they hit my ears. I imagined him struggling at first, but quickly remembering how to maneuver his lips to make sounds that turn quickly into “love” and “Mommy”.

Eight years ago, it never occurred to me that Jack would find his words using something as silent as a whiteboard. He lost his ability to speak when a rare disease, adrenoleukodystrophy (ALD), created chaos in his nine-year-old brain. (ALD is the disease depicted in the movie Lorenzo's Oil). Since then, he’s been a silent witness, sitting on the sidelines, watching everyone around him and listening. He understands most everything that people say.

Lately, he’s started responding to questions by circling answers when provided with a few choices on the white shiny plastic. These “conversations” feel more like a game of 20 Questions than true communication, but we’re thrilled. It’s finally proven that he is able to read and capable of controlling a marker enough to make a simple circle around an appropriate answer—this is HUGE progress for our boy.

Of course, we’re all hoping this is the beginning of significant headway in the language department. That it might lead to writing on a whiteboard or finally using his iPad with some consistency. Or, maybe (fingers and toes crossed) something might trigger in that brain of his and he could start speaking. No one is happier than his mama. But, as we creep closer to language, I’m starting to worry. What on earth is Jack going to say?

Jack knows secrets about almost everyone who has stepped foot in our center-hall colonial. He’s been in the middle of parties full of his sister’s rowdy friends, and sat quietly in his back seat car throne, while his father and I sit in the front seat discussing private matters as we drive down the highway. And, on many occasions, Jack’s perched on his kitchen stool, surrounded by middle-aged women drinking coffee or Sauvignon Blanc, while loudly discussing their husbands, their children, their friends, their hair cuts and other tedious details of the lives of suburban housewives.

I’m not sure why we all feel so free to talk in front of our handsome teenage boy. Perhaps it’s not just his silence, but his ability to disappear into the landscape. He’ll sit with his eyes glued on the television with only a brief giggle indicating he’s heard an inappropriate phrase come out of an unsuspecting mouth. For eight years, he has been silently collecting an arsenal of stories.

What if our dream of words comes true and stories start pouring from his lips? Will he feel the need to share all of our secrets or can we trust him? I wonder how much I’d need to pay him to keep his beautiful mouth closed?

This morning, as we sat on the front steps waiting for his school bus, I asked him, “JackO, will you ever share my secrets?”

I used our black marker to write YES, NO and MAYBE. He looked down at the words and then up at me. Then, he giggled as he circled all three.
Ellen Seidman at 6:38 AM