The thrill of one finger stroking a baby's head 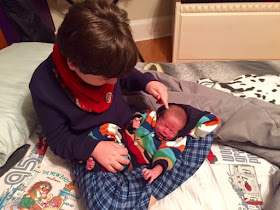 We put Ben on Max's lap the other day. Max gently stroked the baby's head with his pointer finger when he started to cry, and I felt a rush of gratitude. Not just because Max was comforting him, but because of that finger. When Max was little, we weren't sure he'd be able to use it.

As Max has gotten older, I've come to take some of his physical and cognitive achievements for granted, including the biggies (like walking and reading) and the not-so-seemingly-big-but-still-biggies (like holding a spoon and picking up toys). Max's speech is probably the one thing I regularly appreciate, perhaps because both his progress and challenges are apparent every time he talks. Every so often, though, Max does something and the struggles we went through in his early years come back to me.

Typically-developing tots between 9 and 12 months old usually start doing a basic pincer grasp, learning to hold onto small objects like Cheerios with their thumbs and pointer fingers. Max's fine-motor skills were pretty impaired because of the stroke; at times, just getting him to open his fisted hands was a challenge. Until he was seven, he tended to grasp objects—and hold onto them for dear life—using whatever fingers he could maneuver.

When a forward-thinking speech therapist at Max's school had him try the Proloquo2Go speech app five years ago, it seriously encouraged him to isolate his pointer finger and start using it more. Max still doesn't have the most stellar pincer grasp, but 1) He continues to make due and 2) Nobody ever lists "Amazing pincer grasp!" on their web dating profile.

Then I saw Max stroking Ben's head with his finger and I was wowed. And when Ben was falling asleep one evening while I was nursing him and Max tickled Ben's foot with a finger to try to wake him, oh, how amazing it seemed. It's also still a really cute finger.

Maybe I'm noticing Max's use of his index finger because his relationship with Ben is new, and I'm taking it all in. Or maybe it's because unlike with Sabrina's birth, when Max was two and had a long way to go developmentally, this time it's so very clear just how far Max has come.