Loving the little things: the gift Max has 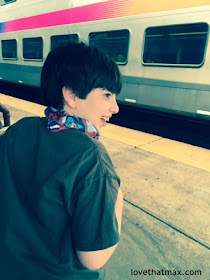 Max stood on the train platform this weekend, eyes fixated on the horizon as a train approached. He had a gigantic smile on his face as it pulled into the station. Later, I shared a photo on Facebook. "I love how he loves life," someone commented. That's it exactly: Max has this unbridled joy for things big and small.

Given that events like going on a Disney Cruise or riding a fire truck to your birthday party don't exactly happen every day, it's mostly the little pleasures he relishes, and he has lots of them.

He shouts "YEAH!" when I agree to drive him to the fire station for a visit.

He excitedly points when he finds mac 'n cheese on a restaurant menu.

His face lights up when we're driving around and we see a sign with his name—say, "Max speed 55."

He giggles in anticipation when he sees a guest pulling up to our house for a visit.

He claps along delightedly to music he likes.

He cackles when he rides his bike down the street faster than he should.

He literally does a happy dance at the bowling alley when he knocks pins downs.

He gives me a big, happy high-five after I finish reading him a favorite book at bedtime.

When he's sitting on the porch and he sees me coming down the street, home from work, he squeals. That squeal is one of my favorite sounds, ever.

As kids get older, their unfettered enthusiasm tends to subside. I see it happening with Sabrina. At 10 years old, she still has some of that wonder and excitement—for science projects, for crafting‚ for baking, for catching fireflies—although she's maturing and getting less gushy. Max's exuberance hasn't changed over the years.

So, yes, perhaps his behavior is more typical of younger kids. Who cares? If this boy derives such bliss from everyday stuff, it's a gift—for him and for me. It's constant infusions of joy throughout my day. Heck, we'd all be happier if we savored life's little pleasures the way Max does.