With gratitude to the Americans with Disabilities Act...and still wanting more 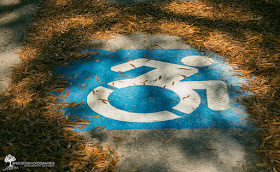 This is on my mind because yesterday marked the 25th anniversary of the creation of the Americans with Disabilities Act (ADA), which says that persons with disabilities cannot be discriminated against in employment, public services, government, transportation and communication. The ADA applies to public programs as well as private ones that operate in a place of public accommodation, including recreational programs, camps, hotels, zoos, parks, gymnasiums and other places of health or recreation.

The ADA is the reason why a growing number of cities have made the areas and services children utilize—including playgrounds and public pools—more universally accessible. It is the reason workplaces have increasingly hired people with disabilities, although per the most recent Bureau of Labor statistics, in 2014 the unemployment rate for people with a disability was 12.5 percent and the rate for those without a disability was 5.9 percent.

In many ways, in countless ways, the ADA has been a game-changer. A powerful Washington Post  by disability rights scholar and legal activist Robert L. Burgdorf Jr, Why I wrote the Americans with Disabilities Act, clearly lays out the appalling conditions that existed pre-ADA. He notes, however, that the "ADA is not a panacea for people with disabilities," and that we cannot ignore the fact that there are major gaps in enforcement of the law—including some entities "I-won't-do-anything-until-I'm-sued attitude."

As a parent and a blogger, I am well aware that ADA is not a foolproof guarantee of accommodations. I think back to stories in the news, including the gym that at first refused to host a birthday party for a boy with Down syndrome. Or this story about a four-year-old girl with spina bifida in Missouri who uses a stander; little Izzy couldn't attend a local pageant because the stage was inaccessible. Or the one about a teen with cerebral palsy who took the DIY route for getting automatic doors installed at his high school (school buildings built before 1990 do not have to retrofit facilities if it results in undue financial burdens).

You might recall these stories. If you have a kid with special needs, you've probably lived some versions of these stories. We've mostly run into challenges due to toileting matters. The ADA guidelines expect child care providers to make "reasonable accommodations" for toileting. Depending on circumstances they may or may not have to diaper an older child who is not toilet trained because of his disabilities. We had a disturbing run-in last summer at a hotel's Parents' Night Out program because Max wasn't able to independently use the bathroom. Over the years, Max has been turned away from other programs and camps for the same reason.

What the ADA can't resolve is the persistent prejudice in people's hearts and minds that kids and adults with special needs are fundamentally very different from the so-called typical population, and that accommodating them is a burden and a beast. Kids require care, period. Some need more help than others. It's not so challenging or, necessarily, costly; it starts with having an open mind.

With social media, parents have a chance to speak out, raise a ruckus about injustice and help the world see our children's abilities. With the discussion raised around the ADA's 25th anniversary, I hope yet more awareness is raised—especially in the conscience of our country to do not just what's fair but what's right.

8 ways to include kids with special needs in programs, events, classes, camps, wherever