A boy who happens to have cerebral palsy does a triathlon: the viral video 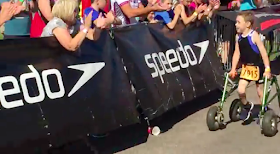 Bailey Matthews, an 8-year-old from Nottinghamshire, England, completed his first triathlon this weekend. Check out the video, which is going viral worldwide:


Oh, how I love that look of pure ebullience on Bailey's face as he nears the finish line. As the parent of a child with cerebral palsy, I appreciate the effort that went into this triumph. Mostly, though, I am impressed with Bailey's athleticism; he completed a 100-meter swim, 4,000 meter bike ride and 1,300 meter run. How many of us could pull that off?! So it makes me wince when I see people largely focused on the idea of Bailey completing a triathlon despite his disability.

Bailey's prowess is impressive, period; same goes for athletes competing in the 2015 Special Olympic World Games. Their physical and mental strength is something to celebrate, but that wasn't the angle some of the news coverage took with Bailey. "This story will melt your heart," read the blurb on YouTube from BBC News. Bailey "shows bravery," proclaimed a BBC headline. I won't even get into the unfortunate British way of referring to someone with CP as a "cerebral palsy sufferer."

Bailey isn't brave—he did what he set out do do. That's known as "determination" and "drive." Calling his accomplishment heartwarming or courageous (typically used to define doing something scary) detracts from this boy's athletic abilities.

As Bailey's father, Jonathan (himself a triathlete) told the Yorkshire Post, "The majority of what he does is self-propelled. He sets his own goals when he is swimming and says, 'I am going to do x amount of meters today.'" Said his mother, Julie, "We knew he would do it but I didn't expect the reaction from everyone else. The difficult thing is that for us it is normal. We know how amazing he is."
Ellen Seidman at 6:40 AM