The power of special needs parents: A video reminder 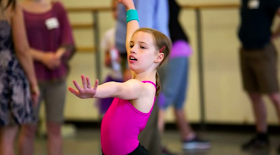 OK, you know just how much you regularly achieve as a special needs parent, whether you're advocating for your kid to get more therapy sessions or better schooling, or just helping the people in your lives appreciate him for who he is. Sometimes, it's frustrating to think of how much more you could do, if you had the time. Often, it's maddening when roadblocks crop up in front of you.

I saw a video this weekend that reminded me of the importance of just asking for what you want. Yep, that's it: asking. Including seemingly big asks.

"It would mean so much to my daughter and children like her to be able to take part in a New York City Ballet workshop, and for one day, feel like they too could become ballerinas," mom Natalia Armoza wrote in an email to the New York City ballet. Her daughter, Pearl, has cerebral palsy. Natalia had heard about workshops there but, she noted, "I didn't want her to be the focus of other people's stares or comments."


The result: the NYC Ballet, with the help of the utterly awesome Dr. Joseph Dutkowsky, associate director of The Weinberg Family Cerebral Palsy Center (Max met him in February), set up four workshops at Lincoln Center for Pearl and kids like her. As mom Joanne Duff described the experience, "Freedom. Total freedom. She can let her body go, she can be the same as someone else." As her daughter Juliet said, "Just let it go, and feel the rhythm and yeah!"

There are other New York area programs that offer ballet for kids with disabilities, including Dancing Dreams and Feet in First (until recently, only offered in L.A.). But children learning moves at the world-renowned New York City Ballet is a first. Upworthy captured how it all played out for nineteen kids…all thanks to one mom's email.

Image: A Dream Workshop with The New York City Ballet/YouTube