Dolls with disability: The new line people are loving 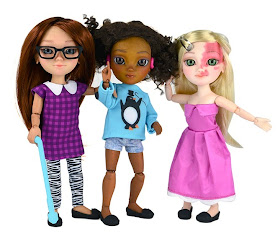 One doll has a walking stick, another a hearing aid and one, a large birthmark. They're debuting soon in response to the Toy Like Me Facebook campaign that calls for more diversity in toys, particularly ones geared toward kids with disabilities. People posting comments and photos have shared ideas for everything from dolls with hydrocephalus to ones with walkers.

London-based manufacturer MakieLab is creating the dolls with disability and differences via 3D printing. Kids will be able to customize the look of the dolls—the gender, outfit, hair and eye color—then pick add-on aids and accessories, including a wheelchair. It's yet one more way 3D technology is a game-changer for people with disability.

Dolls with a disability aren't very common. Some kids have been concocting their own versions, like these dolls created by a 10-year-old who's been an above-the-knee amputee since infancy, complete with crutches from broken hanger pieces. 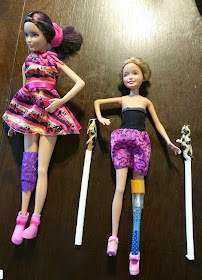 Another 10-year-old girl with a form of muscular dystrophy started a change.org petition to get American Girl to release a doll with a disability, and snagged 145,000-plus signatures. As she noted, "Disabled girls might be different from normal kids on the outside. They might sit in a wheelchair like I do, or have some other difficulty that other other kids don't have. However, we are the same as other girls on the inside, with the same thoughts and feelings. American Girls are supposed to represent all the girls that make up American history, past and present. That includes disabled girls."

Alas, diversity in dolls does not cheap; the MakieLab beauties will run $108 each. Hopefully, major toy companies will see the attention these dolls are getting and follow suit with more reasonably- priced dolls. Some small enterprises have come out with diverse dolls, including Extra Special Dolls, started by the mom of a girl with Down syndrome who wanted dolls that resembled her daughter. Doll maker Karen's Kids offers a Special Angel line with customizable dolls including ones with prosthetic limbs, feeding tubes and cochlear implants. The B Independent site carries crutches, a seeing eye dog and cane and other accessories for dolls. 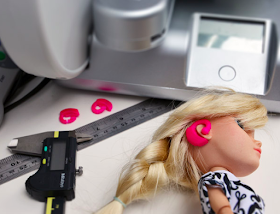 Images: MakieLab
Ellen Seidman at 6:35 AM