The eating of the sandwich: another milestone 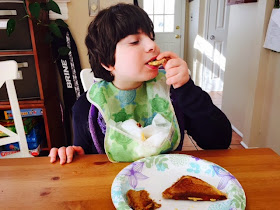 Max really enjoys eating (chip off the old block!) and I've been hoping to introduce him to the wonders of sandwiches. But I've been hesitant, too. Since he has issues with oral-motor control, chewy and chunky foods pose a choking hazard, as they do for a young child.

Our weekend speech therapist sometimes does eating sessions with Max and gives him thin strips of a cheese sandwich, placing them on his back molar to he can best chew them. I've tried that successfully. I just wasn't sure whether Max was up for eating or holding an actual sandwich.

But he's been chewing stuff better lately and grasping things better, too. So Monday, when we all had the day off, I decided the time had come for The Eating of the Sandwich. It was also not snowing outside for once and in the back of my head I thought, If he chokes and I need to call an ambulance, it will be able to get here. I realize that may seem like extreme anxiety but this is a kid who has been known to gag on water.

My dad used to make us delicious toasted cheese sandwiches using a contraption that looked like this Toas-Tite, which he'd hold over a gas flame. Oh, how I adored those sandwiches, and the fact that he made them for me.

We have the modern-day equivalent, the Cuisinart Dual-Sandwich Nonstick Electric Grill, and sandwiches come out nice and soft. 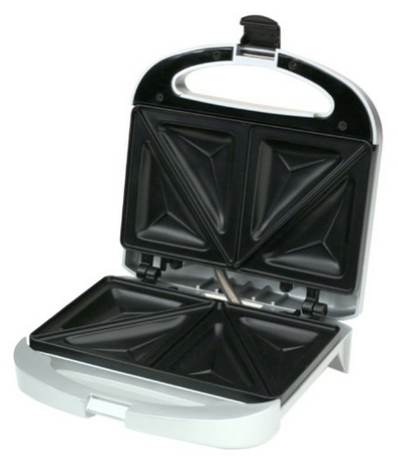 I cut off the crusts from two slices of bread, slathered on olive oil on one side, added two slices of cheese, closed the sandwich, plopped it into a slot, shut the top and toasted away. It only takes about three minutes.

Once the sandwich cooled, I cut one side in half and handed a quarter to Max. Holding it was a bit awkward but he got it into his mouth.

Max ate two quarters and decided that was enough, which was fine with me because I was more than happy to polish off the other half.

It was a milestone for him. And a parenting one for me, because it is so nice to introduce your kids to the pleasures of your own childhood.