Oh, yes, he KNOWS what he wants 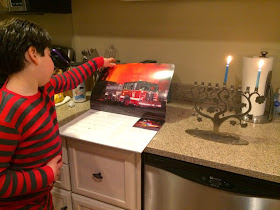 "He knows what he wants!" people sometimes say when they hear Max expressing an opinion or request. Like when we were at a holiday party the other day and someone asked if he'd like a chunk of the big hero sandwich. When Max said "No!" quite profusely, the lady serving the food looked surprised, smiled and said, "Well, you can certainly speak your mind!" (We are still working on the "No, thank you" thing.) I think it comes as a surprise to some that Max is capable of being opinionated, perhaps because of his speech issues.

As one of the people most subject to hearing Max's opinions, I am fully aware that this boy knows exactly what he wants. Picky, some might call it. Nitpicky, others might call it. Like when I gave him a fire truck 2015 calendar for Chanukah. (The one for which I first Googled "firefighter calendar" and up came all these images of half-dressed firefighters posing for calendars that aren't exactly what a 12-year-old kid wants but are not, er, un-interesting for his mom to see.)

So Max looks at the calendar and seems pleased, so that's good. And then he informs me that actually, his favorite fire truck from the local station, number 31, is the one that deserves to appear on the cover. And how am I going to argue with that? So I print out a copy of the truck and tape it onto the calendar cover.

Then he flips to December, and wants me to fill in that the 10th is his birthday. So I write, "Fireman Max's birthday" there. Only, actually, he would like me to also fill in what presents he will be getting.

"Sorry, Fireman Max, I don't know yet what presents you will be getting," I say.

I look perplexed. He walks over to the iPad and in his speech app types out "ride."

Oh. That. He would like another ride on the fire truck to his birthday party next year.

When Max was younger, he really wasn't so opinionated or focused on the world around him. I think his brain was processing a whole lot, and still recovering from the stroke. Typically he was satisfied with whatever you put in front of him: food, toys, books. Then came a point when he wanted to make requests but lacked the speech, so we created a binder with photos he could point to (this was pre-iPad).

And now, he goes to the fridge, throws open the door and shows us what he wants for lunch. He argues with Sabrina over what to watch on TV. At bedtime, I go through at least five rejections before I finally find a book he wants to read.

It's the sort of thing you just don't take for granted when you have a kid with special needs. As tiresome as it can get having to write "Fireman Max" everywhere (he made me write that on the envelopes of birthday cards he got that only stated "Max"), or reconfiguring stuff to please him, it really is awesome. Mostly.

If you are not yet at the point where you're ripping your hair out because of your child's copious opinions, requests and demands and simultaneously savoring it, I hope it will happen to you, too! And if you are? Let's talk!