On being a little freaked that your kid's getting older 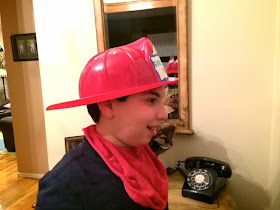 "Max, you look so much older with your haircut!" I told Max last night.

We both cracked up.

Unlike Sabrina, who has been gazing into the mirror wondrously at her hair for years now, Max has never cared how his hair has looked. Me, I like it on the moppy/floppy side with long bangs, aka the too-cute cut. I've let his hair get so long that on occasion his teacher has sent not-so-subtle notes like "Max is due for a haircut!"

But this year, Max started caring about his hair—he likes his bangs tucked into his firefighter hat. First, we found him in the bathroom one afternoon, slicking back his hair with water. That was the first time I've ever seen him doing anything with his hair, and it was cool. Then, he started asking Dave to gel his hair for him. Then he asked for a haircut, just when his hair was at its moppiest/floppiest/cutest, and of course I obliged even though I didn't want to.

For him, it's all about the hair but for me, it's more than that. At heart, I'm not ready for him to look like a tween.

I'm sure many mothers struggle with the reality of their rapidly growing kids. What happened to that baby I used to rock to sleep? How did life pass so fast? Will he still give me those uninhibited hugs and kisses? Does this mean I'm getting old, too? (Yep.)

I have an added concern. Max has always looked younger than his age, and that's worked well for him—it's gone hand in hand with his development, since he acts younger than his age. But I wonder about this evolving child in his Fire Chief plastic hat who is going to be 12. It's not that I am concerned about whether he will catch up with his peers, because I long ago stopped caring about that. Max is on his own timeline; I'm here to guide the ride, but I can't make it go any faster.

It's just this: He already gets stares from other kids. As he starts looking more like his age, I think there will be even more stares. And kids may be even more likely to keep their distance. And the older ones who talk with him now because they think he's cute, where will they be?

I fear the day when he notices the looks or the peers who ignore him. I hope he will not care, although that's a double-edged sword. Because if he doesn't care, it means he lacks that awareness. And if he does care, he has that cognition—but he may also feel the pain.

If and when Max does sense that kids are looking at him or shunning him, well, then, I hope I can empower him to engage with them and break the stares. Or say stuff like, "Hi, I notice you're staring, what's up?" Or, "Hey, babe, want to try on my fire hat?"

Most of all, I hope he will continue to feel nothing but joy in being who he is, like he does now. And that maybe he will be game to let his hair grow out just a little moppy-floppy.