A girl caged at school: A disturbing reminder that we are our kids' protectors 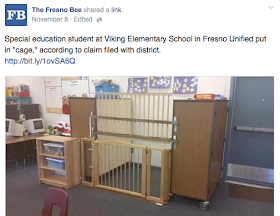 There's comfort in knowing you have a team of people helping you raise your child: doctors, therapists, teachers and other experts. But really, it comes to this: You are your child's best advocate—and protector. I was thinking about this over the weekend after a reader let me know about some horrifying news out of Fresno, California: a 7-year-old girl with special needs suffered abuse at school in plain sight.

When parent Ledelldra Brooks visited her daughter's classroom at Viking Elementary in May, unannounced, she found her daughter in a makeshift cage assembled from a toddler gate and crib attached to two bookshelves. As reported by The Fresno Bee, Brooks pulled her daughter out of the class, called the principal and alerted the police. Investigators came and took apart the enclosure.

Internal district emails show the school quickly got the 7-year-old, who has intellectual disability and a seizure disorder, into a new school. The teacher was placed on administrative leave...but now works at another elementary school.

The police report includes interviews with two aides who says that children were put in the gated area only when they were out of control, or posed a risk to themselves. On the day in question, Brooks' daughter had supposedly been disruptive and scratched an aide, why she was caged. Principal Christine Yang told authorities that the enclosure, three years old, was a safety precaution, and she'd seen children inside it before.

Yes: The principal wasn't just aware, she didn't seemingly have an issue with this setup.

Caging children—even to help them calm down—can do psychological harm. "It's a cage, this is what you would put a wild animal in," said Joe Bowling, executive director for the regional board of the California State Council on Developmental Disabilities. "Obviously there are people in the district that need training. I can't believe that somebody, an administrator walking in that room and seeing it, would allow that."

We've been lucky to have had good teachers and class aides in Max's life. We had an issue with one bus aide several years ago—a sweet woman who, we found out, was seating Max in an unsafe and uncomfortable way. I raised heck about it. Then I demanded to know what training protocols the bus company had, and how they ensured drivers and aides followed them. The head of the bus company took issue with my questions. I didn't care; the fact that the aide didn't know what she was doing—and that nobody at the bus company was aware of that—raised alarm bells. Eventually, Max's bus got a new aide.

Of course, there are always two sides to every story. Here's another perspective from a Facebook reader who left a comment noting that her child, who is in a wheelchair, is in a class with a new student who has autism and ADHD. That student can get out of control, and has sent one teacher to the hospital after biting her; another teacher ended up on crutches. A one-to-one aide isn't an option because of budget reasons. As she writes, "I hold no animosity towards this kid at all. He is how he is. He needs help and so does the teacher. They have a corner of the room that they set up as a safety corner for him that had a gate. They could put him in there where he could play safely without harming anyone and my son could get out of his wheelchair and his floor chair. The administration said they couldn't do it and they don't have the gate anymore."

This, too, is troubling. The decision not to gate the child seems right—yet wrong, because the school has not offered up another solution and it's endangering both students and teachers. It seems like this mother will now have to advocate for her child's right to be in a safe environment where he is free to move around.

All children, special needs or not, need their parents' eyes and ears and, as is necessary, our big mouths. But our children with special needs require extra monitoring and advocacy, especially when they are unable to speak up or for themselves or defend themselves. What happened in Fresno is a sobering reminder that it's up to us parents to keep an eye on the the people keeping an eye on our children. As my friend Erica said on Facebook, "I'll never stop being that mom that is aware of and involved in my child's academic and therapeutic environments. Annoying? I'm OK with that label."