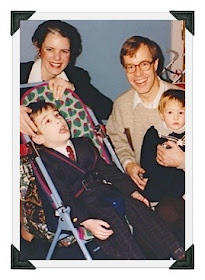 This guest post is from Donna Thomson, author of the new book The Four Walls of My Freedom: Lessons I’ve Learned From a Life of Caregiving. Donna is mom to Nicholas, who has cerebral palsy; they live in Ottawa, Canada. Donna began her career as an actor, director and teacher. In 1988, when Nicholas was born, Donna began a second career as a disability activist, author and consultant. Nick is 25 now and, Donna says, "He finds meaning and purpose by writing his hockey blog. He is active on Twitter and Facebook. His favorite activity is managing an online fantasy hockey pool." 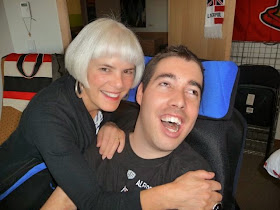 Nick is looking to get a job, she continues, and recently created and delivered a resume to his local community ice-hockey arena; he's hoping to be hired for a part-time volunteer job. "This particular dream is still a work in progress, but he's determined to succeed," says Donna. She is married to James Wright, a retired career diplomat, and is also mom to Natalie. 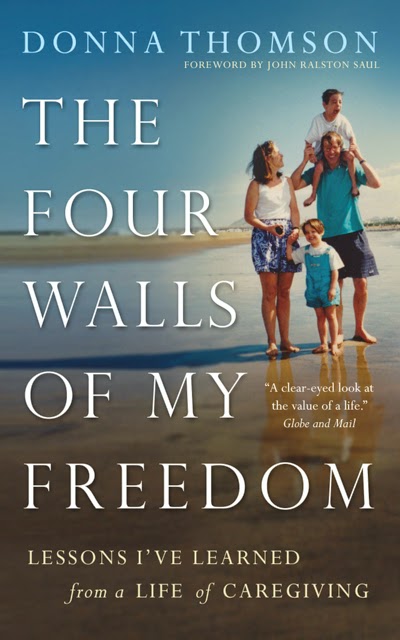 I was alone with the doctor in the hospital playroom when she gave me the news about our six month-old baby son. "Never be normal" are the words I recall. I also remember “generalized cerebral atrophy." Pea brain, I wondered?  "Esophageal reflux," she continued, listing his challenges as her eyes welled up. "Nothing to keep food down where it belongs. Common in cerebral palsy. Pain similar to heart attack." I stared unblinkingly at the blue stripes on her blouse. I looked down and something red caught my eye. Blood was oozing from the edge of my thumbnail where I had bitten it.

"Now I will be able to feed my child," I thought. Nick had never managed to suck or swallow efficiently, and his efforts to feed were punctuated with gasps and coughs. He spat up most of what he did manage to ingest. Suddenly, I was convinced that if I could learn to correct my feeding technique, all would be well.  "I will become an expert," I thought. "I will apply myself to becoming a great mother, and my baby will grow into someone perfectly perfect."

Passing the ward desk, I noticed the nurses half turned, whispering, their pitying eyes fixed on us. I scooped up Nicholas, deposited him into a stroller and paraded up and down the hospital halls, back straight, eyes fixed ahead.But I was not all right. I wrote in our baby book: "February 22-25, 1989: Nick admitted to hospital. Cat scan, PH probe and digestive barium x-rays. All abnormal…trying to absorb this terrible news."

Over the twenty-six years of our son Nicholas’s life, I have learned lessons about what it takes to thrive against all odds. These are five building blocks of happiness I’ve learned along our rocky path:

From the moment of Nicholas's diagnosis to the instant we realized that it was time for a wheelchair, we have been forced to accept the unacceptable. When it became apparent that Nicholas would never express himself verbally, a conversation with another Mom helped me reframe my thinking. "We don’t do our own dry cleaning or make our own soap," she said, "so what's the matter with a computer helping Nick to speak?" After that, assistive devices became our friends, not our enemies. Nick has taught me to trade my definition of success for his.

Striving to be independent and self-reliant is a strong message in our society. And it's a toxic one: An inability to achieve independence is seen as a moral failure of personhood and if we believe that, we don't see our own frailty or that of everyone we love, especially our children. We are meant to be inter-dependent. Nick's network of support includes our family, his paid helpers, his friends and his doctors.  Together, we all help Nick to live a good life on his terms. We rely on each other as any winning team does.

A wise friend told me recently that our most vital challenge in contemporary family life is to be intentional. Intentional about asking our children what a good day looks like for them, intentional about asking for what we need, even intentional about being happy instead of miserable. At Nick's neighborhood school, the other children were friendly, but brief in their conversations. One day, when I was volunteering in the classroom, I noticed an impulsive boy with a fiery temper was transformed into a caring, model student when paired with Nick. This young lad became a daily after-school visitor and frequent dinner guest. I learned how to engineer social opportunities for Nicholas by watching for signs that others needed something Nick and our family had to offer.


Know that a good life is possible.

Everyone has different idea of what they need to be happy. In our family, we began by asking ourselves, "Given our realities, what is a life that we value and how can we create it?" For me, this meant learning to be mindful and grateful at home, but to begin planning for a retirement from giving full-time care to our son. Living in the moment gave me joy, but planning my own future gave me hope.

When Nicholas was young, he did a kind of non-directive communication therapy called "Special Time." During the hour, the therapist did not speak herself, except to reflect back to Nick what she saw him do and what it might mean. It was an hour of intense intimacy and heightened listening. Special Time had many communication benefits for Nicholas, but it had benefits for me, too. I learned the value of stopping time in order to listen intently and exclusively to those I love. Even ten minutes a day of special time with a son, daughter or spouse enriches family life. 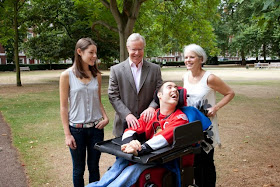