Great news about cerebral palsy, and some not-so-great news 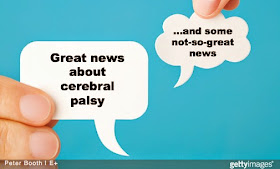 It's cliché but, hey, let's start with the good news (because it really is good). Teens with cerebral palsy rate their quality of life pretty high, per a new study—the first of its kind—published in the prestigious medical journal The Lancet.

British researchers had 431 adolescents with cerebral palsy, ages 13 to 17, from nine European regions fill out a questionnaire. Then they compared the answers to those of young adults in the general population. Teens with CP rated their overall quality of life as comparable to that of peers without CP. And they reported better quality of life than their peers in five areas: moods and emotions, self-perception, autonomy, relationships with parents and school life. As the lead author noted, this study challenges "the widespread perception that adolescents with disabilities have unhappy, unfulfilled lives."

So there's that. And then there's this: The only category in which teens reported their quality of life as significantly lower than others was in the category of social support from friends and peers.

I wasn't surprised, based on my experiences raising Max and what I've heard from other parents who have kids like him. But I was bummed to read a statistical finding on it.

For a kid who is amazingly friendly and social (and charming and giggly, sorry to gush, I'm his mother), Max does not have non-disabled friends. A lot of this have to do with going to a special needs school, but it's also because being a kid with cognitive and physical disabilities can be very isolating. It's not like Max can jump on a skateboard and cruise the neighborhood with the other kids who live nearby, shoot hoops with them or do any number of active things the kids around here do. Still, it's not only about a physical divide; the other kids are nice to him but just aren't interested in hanging out, probably because they have such varied interests. They want to talk games and sports and tech stuff. Max wants to talk about being a firefighter when he grows up. Meanwhile, I am partly to blame because I have never put a lot of effort into initiating friendships; getting Max to progress physically and cognitively has been all consuming.

The blessing is that Max does not care about this lack of friends—he is content with the life he has. I am of the mindset that he just doesn't know what he's missing and if he did, he would mind. I sure do.

I think having a variety of friends is important to him not just socially but for his future. Last year, I saw the documentary Certain Proof about three kids with CP in a public school and the challenges they face. This quote from an expert has stayed with me—or, rather haunted me: "If these children with severe disabilities are educated in a completely separate environment, they will never have opportunities in the community when they leave and they will have to have systems of separate service delivery for the rest of their lives."

Inclusion in our local school isn't the right setting for Max at this point. I'm not sure it ever will be. So I really have to do more for him socially. I need to figure out ways to enable friendships. Real ones. I've been thinking about putting up a note on my neighborhood Facebook group asking parents to encourage their kids to hang out with him. Or throwing out a request for playdates on my local moms group e-loop. I do not want to make this seem like a charitable deed, because Max is not a charity case, but there is really no organic way of doing this.

Last night, we went to a dinner at our temple for the Jewish holiday of Sukkot. For dessert the kids sat around a large table and decorated cupcakes with blue and white icing and candy. Max has a hard time holding cupcakes because he grasps them so tightly they crumble, so I was feeding it to him. I watched some of the other kids watching him, trying to figure out what was up. His ever-present firefighter hat doesn't make him blend in with the crowd, that's for sure.

When Max was done, I said, "Let's go say hi to the kids!"And we walked over to boys who seemed about his age and I said, "Tell them your name" and he said "Fireman Max!" I often have to prompt him about conversation so then I said, "Ask them their names!" and he did. Then we discussed ages. Then he asked them what they wanted to be when they grow up, which is always a good ice-breaker: An FBI agent! A police officer, who could work together with a fireman! An astronaut!

The kids dashed off and Max was getting tired and wanted to go home. We went and found Sabrina, who was playing Uno in the playroom with other kids. And then, something happened that nearly made me melt into the floor: Max put his hand into hers, which I've never seen him do. The two of them walked out holding hands.

She is there for him. And evidently, God wants me to know it, too. But this boy needs—no, he deserves—more.