As long as he's happy 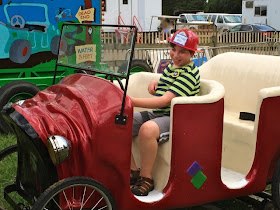 "As long as he's happy, that's all that matters," people like to tell me about Max. A man said it to me at the fair we were at yesterday.

And Max was happy, as he often is. There were fire trucks there, and a chance to use an actual fire hose. 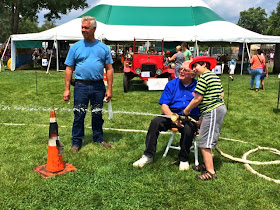 There were train rides and car rides. A mini roller coaster he liked to just watch. 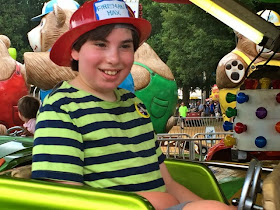 There was a talking robot named Max who said "Hi, Fireman Max" in his robo-voice and I think Max may have accidentally touched his robo-privates, but I'm not sure. 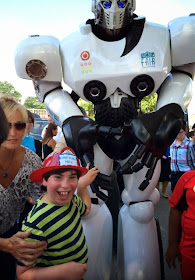 There were animals to feed. (Hot tip: Donkeys vastly prefer the grass you can rip up outside the tent, free, over the cup o' feed you pay for.) 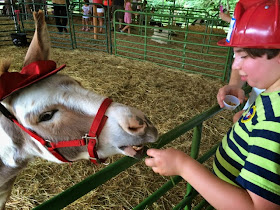 There were games to play and yellow, pink and blue (blue!) lemonade and ice-cream. Heck, most kids at the fair seemed happy. Max was no different.

People only mean well when they say all that matters is that Max is happy. I know that. And yet, it gives me pause, and a twinge of sadness. Because it implies that Max may not be capable of much of anything beyond bliss. Oh, but he is, and those who are close to him know it. And I hope the future holds a lot more than happiness for Max, as I've said here before: a relationship, a job he loves, experiencing all that life has to offer.

Yesterday, after the guy manning the ride said "As long as he's happy, that's all that matters!" I nodded, as I usually do. I kept thinking about what he'd said as I watched Max stand in front of a band that was playing on a stage, grinning. A few minutes later, he said he was thirsty and I helped him drink blue lemonade and he said "Ahhh."

And I thought, standing there in the heat as the boppy music played and kids danced: Max is happy. And while it's not all that matters to me, it's what's important for him.

I often do that, as his mom—I project my wishes and dreams onto him. And probably that will never stop, but it would do my heart good to be glad for his happiness alone, and not consider it something that needs to be topped. Max will be so, so lucky if he always has that happiness, whatever else the future holds for him.

Just another step forward in my development as a parent.