Why we can't do the morning rush at our house 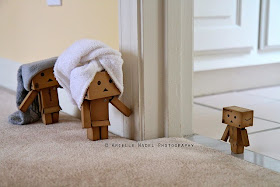 Mornings at our house are much like mornings in the homes of working parents everywhere: We're scrambling to get out the door. But when you're raising a kid with special needs, there are times when it's just not possible to rush.

Max usually wakes up first. Sometimes, he'll come into our room and politely ask Dave to get out of bed, by which I mean he shouts "EH UH!" ["GET UP!"] Then Dave will plop Max down and he'll watch Disney Jr. for a bit. Sabrina gets dressed on her own—or, rather, she puts on one outfit, then another, then another. Next she brushes her hair, tries eleventy billion hair accessories and rejects them all. Then she chooses another outfit. Meanwhile, Dave and I jump in the shower. When I come out and look at the clock, it's suddenly clear that we're running late.

Every single morning, it's like we have never done this before.

We can get Max dressed pretty fast—he's not yet up to putting shirts or pants on himself—but getting on the braces and shoes on takes a good five minutes. He settles down to eat breakfast, steel-cut oatmeal with cinnamon. When he was a tot, I couldn't imagine him feeding himself: He wasn't able to grasp a spoon, plus most of the food dribbled out of his mouth and I'd have to spoon it back in. Now he eats really well on his own, so we can leave him to it as we run around like headless chickens shouting things like "Where are my house keys?!" (me) and "Honey, I am going to be home late tonight because I have to take a client to dinner!" (Dave) and "Why can't you do more working lunches?!" (me).

Meanwhile our sitter, L, shows up; she's been with us for 11 years, and she is the closest human entity to a saint I have ever met.

The other morning was the usual scene. "Sabrina! I have to catch my train! We have to leave sooooooooon!" I shouted up the stairs, because she'd gone off to brush her hair again.

"Hi, Ohmmy!" Max said when I walked by the table.

I'd forgotten: He only wants to be addressed as "Fireman Max."

"Hi, Ohmmy!" he answered, and returned to eating his oatmeal.

Several minutes later, he announced "I aaahn ooh eee a ire-ann!" ("I want be a fireman!"), just in case I'd forgotten from when he said it a few minutes before.

"Yes! You're going to be a fireman!" I said, anxiously watching the clock.

Then he said something to our sitter that neither of us understood.

"Sabrina! We have to go now!" I shouted.

"Coming!" she said and clattered down the stairs. Dave headed out to the car.

I really had to go catch my train to work. Only Max wanted me to understand something, and I couldn't just take off. There has to be time not just for dressing and eating but for understanding.

One of the hardest lessons I've learned as a special needs parent is that there's no rushing things along. You can't make biggie developments like walking, speech and comprehension happen any sooner than they are meant to, no matter how hard you try or how many tears you cry. You can't press a child to pick up toys with both hands, kick a ball or walk up stairs until his muscles and coordination are up to it, whatever his age. You can't coax a child who's fearful of noise and crowds go to birthday parties or unfamiliar restaurants, because he just won't be able to deal until (and if) his sensory issues abate. You can't hurry a child to learn to say "I love you." You can't get a child to potty train until he's truly ready. You can't speed up reading or doing math. Our kids are on their own timelines, and all we can do is get them as much therapy and as many resources as possible, guide them, cheer on their inchstones and encourage them to keep trying as best they can. (And then find a healthy outlet for letting out our fears and frustrations, plus maybe eat too much smoked Gouda cheese late at night.)

I pulled Max's iPad out of his backpack. He typed two letters on his Proloquo2Go speech app: Dr. 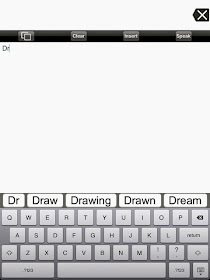 Aha! "Max! You want L to be a doctor when she gets older?" I asked. Besides figuring out his own job aspirations, lately Max has been giving other people career advice.

I knew what he was saying: "Oh, and I'm going to be a policewoman?"