Max takes a walk I will never forget 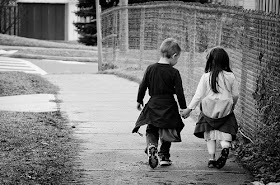 It was a glorious day yesterday—not too hot, no humidity, sunny, nobody was whiny. Early evening, Max was wheeling a stroller back and forth in front of our house as I trimmed the hydrangea bushes, which took a beating this winter.

It's a Maclaren adaptive stroller one of Max's physical therapists gave to him years ago. He can still fit into it and once in a while, if we're going for a long walk, we take it with us in case Max gets tired. Mostly, though, Max just likes wheeling it around.

A cool couple from the next block and their kids came down the block. Max went over to tell them about his fireman aspirations. Lately, he wears his plastic red Fire Chief hat all the time except for sleeping and school and (with some convincing) bath time. I was busy hacking away at dead wood and wasn't paying much attention, other than when the little girl pretended to be on fire and Max started chasing her making siren sounds which made me smile.

Then the family started to head off. Max trailed after them. "We're going for a walk around the block," I heard the mom say.

"Max, stop," I said. I needed to finish fixing up the bushes before dinner or they'd never get done, and didn't have time to go for a walk.

I was a little shocked. Because never has another parent in our area offered to let Max come along for a walk with their kids. Never. It's not that the other neighborhood moms aren't nice—they all are. I think they just may be hesitant to handle a kid with special needs. But not this mom, not this time.

She, her husband, their two kids and Max went off as I stared, awestruck, processing what had just happened. What may have seemed uneventful to this mom was a major moment for me and for Max, too.

Either Dave or I are always with Max when he's out; he's not a kid who can just go knock on another kid's door or cruise around the neighborhood with other boys. This is our life, and I usually don't think twice about it except in early spring, when all the kids start playing outside.

Standing in our front yard, though, I mulled over how for the last 11 years I've always been by Max's side when he's at play. As a toddler, he never did floor time alone—Dave or I were there with him, helping him play. As an older kid, he still needs a hand with playing, painting, getting together with other kids or whatever fun is involved. Granted, he will happily sit alone in our living room glued to the TV or firefighter videos on YouTube, but we limit his time because otherwise, he'd watch for hours on end. (Max is fully capable of snagging the Guinness Book of World Records title for Longest Length of Screen Time by a Child.)

It's only recently that Max started playing alone. A couple years ago, I got him a Lightning McQueen computer and lately he likes sitting in his room and using it. I have to say, it's been a relief to see him doing that. It is a heavy responsibility to constantly engage and enable a child.

Yet there Max was, rounding the corner with the family. I was thrilled. I thought about how it was so good for Max's independence to know that he didn't have to rely on just me and Dave. I wondered if he was going to try and sucker them into walking to town for ice-cream, as he often convinces Marshmallow Daddy to do.

Maybe 10 minutes later, they returned. Max wanted to go into their house with them, so I headed over to lure him back because it was dinnertime. After a little persuading, he came.

"Thanks!" I said to the mom, when what I really wanted to do was throw my arms around her and give her a great, big hug.