A teen with disabilities makes the football team: Check out this short film 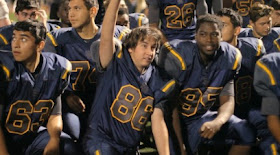 I got to see an amazing14-minute documentary over the weekend. Titled MATT, it's about a high school senior who's on his school's varsity football team. Ordinarily, that's not movie material but Matt was born three months premature, at 1.5 pounds. Doctors told his parents that he might never walk or talk and that if he did survive, he'd be in a vegetative state. Today Matt has disabilities associated with prematurity, but he's clearly thriving—and kicking sports butt.

The film's producer/director, Seth Shapiro of Diesel Films, is a neighbor of Matt and his dad, Rudy Tapia, in Santa Monica, CA. Matt is a major sports fan. But there was something else driving his goal to get on the team: as he told the football coach, "I just want to fit in... I just want to be one of the guys." Last year, he joined the The Vikings.

I've written about the trend of football teams allowing kids and young adults with special needs onto the field for a one-time moment of glory, and my mixed feelings. But Matt is a full-fledged member of the team. He goes to practice regularly, and played in two football games this season. While I'd hoped it would be more frequent than that, as Seth says, "For Matt, it's about being part of a team, which in turn has become his extended family." Matt's happiness and the players' affection and respect for him really shine through in the film.

I asked Seth what epiphanies he had about people with disabilities in the making of MATT. "My epiphanies are that they are fearless, courageous, defiant, brave...and sometimes stubborn," he told me. "But as Rudy said in the film, that's probably what kept Matt alive."

Then I asked what interesting stuff Matt has said about the film. "I'm not sure Matt understands the scope of this film and the difference it will have on people's lives," Seth said. "But he did say to me,  'Now I may be able to hang out with a few more cheerleaders!'"

How absolutely typical is that response?! In fact, one of my favorite parts of the film is when Rudy notes, "He doesn't see himself as having any problems, he sees himself as normal. He refuses to accept that he's not."