7 things I didn't know about preemies...until I had two 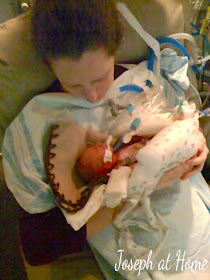 This guest post, in honor of Parents of Preemies Day on Sunday, May 4, is by Laura B. Martin of Joseph at Home. It's a day created to honor parents for their courage and strength. Laura is the NICU ambassador director for Graham's Foundation, founded by parents of preemies to support parents of preemies. A former middle school teacher, Laura is the mother of Joseph, Campbell and Emily. She and her husband, Scott, live in Georgia.


A couple of weeks ago, I was making allergy-friendly cookies for my four-year-old, Joseph, to take to a birthday party. Joseph sat at the kitchen table eating a snack while I gathered the ingredients from the pantry. As I organized them on the counter, he jumped out of his chair. “Me hep oo Mommy! Me hep oo Mommy,” he said as he ran across the kitchen with his arms outstretched for me to pick him up.

Tears formed. Joseph had just expressed a desire. He wanted to help me make cookies. The countless hours of practice and inputting language into his minddadad was coming to fruition. He could finally tell me what he wanted to do. We spent the next hour making delicious cookies he could enjoy at the birthday party.

Joseph has been in intensive listening and spoken language therapies since he was an infant. His hard work and determination are nothing short of amazing—just one of many realizations I've had along my preemie journey.

Until I had preemies I never knew that...

1. In the United States, prematurity affects 1 out of 8 infants.

Before I had my boys, I can remember hearing people say they were born six weeks early and thinking, How is it possible to survive? I was extremely nervous when I was told our twins may come five or six weeks early. Joseph and Campbell were born at 24 weeks gestation. While in labor, a NICU nurse gave us all of the statistics. There was a less than 50 percent chance of survival. If they lived, they could, and probably would, have severe disabilities. There was a very good possibility they wouldn't even survive the delivery; they would be in the NICU until their due date. Their quality of life would be poor. The statistics were not good for our boys. Campbell died at 23 days; Joseph is a survivor. 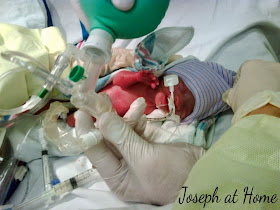 Joseph in the NICU

3. Not only can preemies survive—they can thrive.

Joseph spent 228 days in the NICU before coming home. Although he has a myriad of health complications as a result of his prematurity (hearing loss, vision impairment, hypotonic cerebral palsy, short bowel syndrome, asthma, multiple food allergies, and more), Joseph is thriving. There were many days during our NICU journey that I wasn’t sure we would see Joseph’s first birthday. We almost lost him more times than I can count. We were told that Joseph may never walk, talk, eat and that there would be many things he couldn’t do. He has defied odds. He has proven doctors wrong. He continues to prove people wrong.

Two days before Joseph was slated to come home from the NICU, at age five and a half months, he developed Necrotizing Enterocolitis (NEC). Joseph was sent into emergency surgery to see if there was any salvageable intestine. As they were taking him to surgery, we were told to say our "goodbyes" as there was a very good chance we would not see him again. The surgeon came to talk to us during surgery. He was able to salvage 41 cm of Joseph’s small intestine. Because it was such a small amount, the surgeon gave us the option of closing him up and letting him go. Absolutely not. No way. Joseph is a fighter and we knew he had the fight in him. He still fights hard to make the absolute most of every day.

I have met so many amazing families who lost their child to prematurity. Some lived just minutes, and some lived almost a year. Their children are fighters and will always be remembered.

5. No two preemies are the same.

Just as each person takes a different path in the life, no two preemies are the same. There is no set path for a preemie to take. They create their own. As a mom to a son born at 24 weeks, I have seen babies born at 24 weeks have absolutely no health complications. I have seen 24-week babies not survive (like my son, Campbell). I have watched Joseph overcome so many obstacles yet still have so many struggles as a result of his premature birth. Parents are often told to expect to come home around the due date. Some come home well before this day, some come home right near the due date, and others stay in the NICU months past their due date. Every preemie is different.

I have had the following conversation with preemie parents more times than I can count (after talking about how wonderful our children are):

Parent: "How long were you in the NICU?"
Me: "Campbell died after 23 days. Joseph spent 228 days in the NICU. How about you?"
Parent: "We were only in for 10 days but that’s nothing compared to you."

It’s not a competition who spent the longest in the NICU. Any time spent in the NICU is too long—whether it’s one day, ten days, a hundred days or 300 hundred days. The pain of having to leave your child in the hospital stays with you forever. No one ever dreams they will have to come home without their baby. The pain and heartache of visiting your child day after day and leaving them in the hospital stays with you. It is a feeling you never forget.

Prematurity affects your emotional relationships and friendships. Once you become the parent of a preemie, your life is never the same. You learn to appreciate life just a little more. 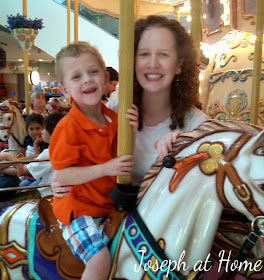 Whether born at 24 weeks or 36 weeks, all preemies are miracles. They came before their time and defy odds. As parents, we watch them grow under the watchful eyes of doctors, nurses, and therapists. We celebrate every milestone, no matter how big or small. Making it through the night with no apnea episodes is as exciting as the first day of school. Taking a bottle for the first time is cause for celebration. Changing a diaper for the first time is more exciting that ever imagined. Life becomes a little sweeter watching a preemie overcome the odds.