When life gets ridiculous, laugh 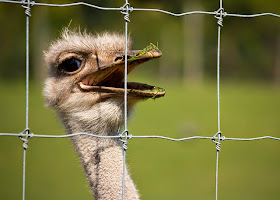 As much as I'd like for Max to branch out, if it gets him interested in creating sentences, I'll take it. Last week's word: "convex." Our sentence: "The rubber part of Cars 2 Talking Lightning McQueen's tires are convex." All the sentences have sort of jumbled together in my mind, but they're all along the lines of "Cars 2 Talking Lighting McQueen often finds himself in predicaments but then figures things out."

Usually, I perch on the edge of Max's bed, and we go over the sheet. This week's word: "veranda." Max was a little stumped, so we put our heads together and came up with this: 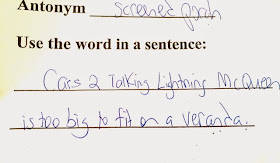 Suddenly, I giggled. Because the ridiculousness of the sentence—and of having to constantly come up with ones that involve "Cars 2 Talking Lighting McQueen"—hit me. Then I started all-out laughing, until I had tears in my eyes. "Max," I finally gasped, "it's just funny to me that we keep coming up with Cars 2 Talking Lightning McQueen sentences." He giggled. I'm pretty sure he knows that he's being ridiculous, but he doesn't care.

I think it is perfectly normal to laugh like this. Kids do out-there things, and just because Max has special needs doesn't mean he should be treated like some hothouse flower. We tease him about his quirks like any family teases any kid. Max has this off again/on again habit of stomping on the floor when he watches TV. It's on again right now. The other day, as he was stomp-stomp-stomping away, Dave, Sabrina and I all started stomping our feet on the living room floor, rhythmically, like he does. He thought it was a laugh riot.

For years, I have indulged Max's obsessions, whether it's repeating phrases, buying him purple stuff or going through car washes. At times, I feel like I am living in a Coen brothers movie.