Why this night was different than all other nights 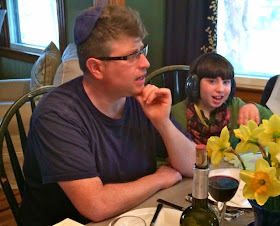 We celebrated Passover last night, momentous because Max sat through the seder (the traditional dinner) for the first time, and because I only had to go on Facebook twice to ask for advice about cooking brisket (consensus: I needed to cook it for an hour more).

During the seder, the youngest child asks The Four Questions—really, four answers to one question, which is "Why is this night different than all other nights?" The answers go on to detail what's special about Passover, including the fact that we eat matzo (flat, unleavened bread), not bread.

But last night, there were five answers: The night was different because Max sat through the entire Passover meal. In other years, the tradition has been for him to hang in another room watching TV as our family said the prayers and told the story of Passover (in short: the Jews were slaves in Egypt, Moses lead them out and parted the sea, then they all starred in a reality show).

But Max has seriously matured this past year and is having all sorts of breakthroughs. It's funny because I've also matured, and I wasn't expecting him to stay for the seder. I'd pretty much accepted that he wouldn't and I wasn't even sad about it, as I have been in previous years.

Things were different starting yesterday morning, when Max was so excited that everyone was coming over. He showed me which seat he was going to sit in. He giggled when he got off the school bus in anticipation, and he greeted everyone animatedly when they walked in. His only demands: headphones and a pre-dinner cocktail of chocolate milk.

Max listened to the entire seder. He downed a bazillion servings of sweet potatoes. He seemed genuinely happy. Dave kept shooting me "Can you believe this?!" looks from across the table. 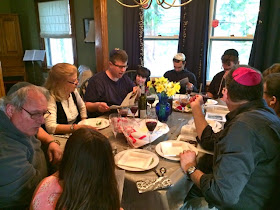 After dinner, Sabrina and her little cousins participated in the ancient ritual of Katy Perry karaoke. Then we all got on a sugar high from dessert, including the world's most amazing flourless chocolate cake Sabrina and I made from this Real Simple recipe. Max's belly looked like it might explode.

When I tucked Max in, he put his hands together, the symbol for "more."

"You want another seder?" I asked.

He was in luck, because there are two Passover seders. This time, it'll be just the four of us. And I have a feeling tonight will be different than all other nights, too.