Will he or won't he: How we live our weekends 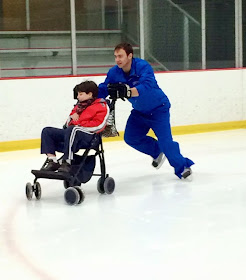 Max's school had an ice-skating event at a rink this weekend. Dave wanted to go fishing with his dad and the kids. The big question: Would Max go?

We're never sure whether Max will be game to try a new activity or not. Headphones make him more comfortable, and he's gotten braver over the years. Still, sometimes, he'll say yes, then bail.

This weekend, we had some wins.

Our weekends are usually a mix of Dave and I splitting up and doing different activities with the kids, then doing some as a family. I tend to take Max to the stuff he's more hesitant about, like we did with his first movie in a theater. This is because I'm the one who's more likely to persist when Max whimpers and try to coax and cajole him into trying stuff he's hesitant about. (In my next life, I'm going to be a foreign diplomat.) So off to the rink we went.

I decided not to tell Max what we were doing. Ice-skating rinks have a din, and Max has never wanted to venture into one. He did love skating on a pond with a walker when we were in Colorado last year, though, and I was counting on that. I took his Maclaren big-kid stroller, which his old PT gave to us from another family. Max likes pushing it around the neighborhood. The skating rink said kids could be taken around the ice on their strollers.

We got to the rink. I took out the stroller and helmet, then got Max out of the minivan. "We're at an ice-skating rink, and other kids from school will be here!" I said. He absorbed that. "Loud?" he asked. "No, it's not loud now," I said, which was the truth—the event was only for kids from his school. And Max cruised right in through the doorway, like a boss. I sighed in relief.

First, Max wanted to glide the stroller over the ice...in his shoes. (He's not up to wearing ice skates yet.) I'm not the steadiest on skates so there I was, walking on ice next to him. Then Max sped up and took a slip and that was the end of that.

Our hero came skating up to us: Nick, an instructor there. He zoomed Max around in his stroller, and Max thought it was The Best Thing Ever. I kinda wanted to try it myself. 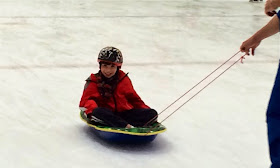 Next up, a new sport: sledding on ice. Slice?

When the event was done, Max didn't want to leave. So we had a slice of pizza and watched kids practicing ice-hockey. Max was enchanted by the goalie. "YAY!" he'd say, throwing his hands up in the air when he blocked a goal. I asked if he'd like to play someday. "No!" said Max. "Fireman!"

Lately, he's been telling me that he wants to be a fireman when he grows up. I tell him that's a hard job to do. He reassures me he'll be ready, especially since he will be seeing Planes: Fire & Rescue as soon as it's out in July.

Sunday morning was the fishing trip. Grandpa Michael has been showing Max how to use a fishing rod, and Max was up for going so off they went. Max hung out for maybe 30 minutes, then he was done. I didn't blame him—I get restless, too. 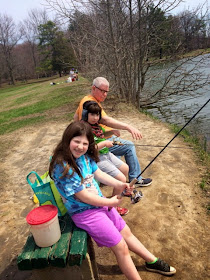 What's made trying new activities and visiting new places easier is that Max no longer has crying-sobbing-shrieking meltdowns when he decides he's not doing something, excluding restaurants, where all bets are off. If he says no, we just sloooowly back away, and we're done.

Last night, he surprised us—emboldened, perhaps, by his other weekend adventures. Max is into avocado sushi rolls, and he told us he'd like to try a new sushi place. So Dave Googled, found a spot we've never been and we headed there. Max walked right in, headphones in place, iPad in my hand. He watched Monsters University. He ate miso soup and avocado roll. We had a nice family dinner out.

And I took none of it for granted.