Three words from Max that made me gleeful 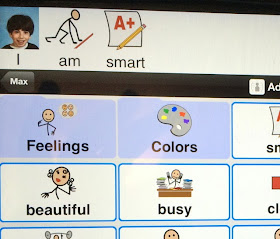 We sat on Max's bed last night, working on his book report. This can be tedious. He has to type out responses in his Proloquo2Go speech app (Title/Author/Illustrator/Where the story takes place/Characters/What happens in the story's beginning, middle and end/His favorite part/Would he recommend the book). The report's due every Wednesday, and as much as I try to work on it over the weekends we end up finishing on Tuesday evenings after I'm home from work and Max is getting tired. Max had picked a chapter book purely because of the name (Max Malone Makes A Million); it was on the hard side for him and I read it to him in small bits over the last two weeks.

By the time we were finished, Max had that I-need-to-sleep-NOW look on his face. I went to get him a cup of water, and when I returned he pointed to the iPad—he wanted me to see something he'd  pecked in. 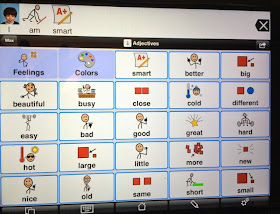 A smile the size of Texas lit up my face. Happy tears crept into my eyes.

As Max's mom, I like to think I know everything about him, but the truth is I don't have a good sense about his confidence or what he thinks of himself. I get the full gamut from Sabrina, from boasts about what a great dancer and speller she is to her concerns about whether certain girls like her. Max definitely seems proud of himself when he brings home artwork from school, aces a new skill like walking up the stairs, spells something right or knows how to get somewhere better than me or the GPS (it's happened). Yet otherwise, Max doesn't give me a sense of how he feels about his abilities or  raise concerns about how other people view him unless he answers questions I ask.

We had our first talk last year about whether he is aware he has cerebral palsy. He is, and thinks Lightning McQueen has it too. I know that he doesn't think of himself as different than other kids, that the CP is just part of who he is. I know that he gets frustrated when he can't do stuff, but he doesn't feel it's because he's lacking. One of my favorite Max stories is the time he kept repeating words over and over to me, and I didn't get what he was saying. Finally, he leaned in to my ear and said them again, really loudly. He didn't think he had a problem with speech; he thought I had the problem with hearing him.

Over the years, Max's ability to communicate how he's feeling has really improved. He tells me when he's mad, sad or scared. Though these emotions are often preceded by tears or screeches, when I press him to explain his feelings he will share. He likes to inform me, when I'm tired-grumpy, that I need to be "happy" and he points to himself, meaning that he'll be happy if I'm happy.

Still, there is so much about who he is that has yet to emerge. Like everything else in his life, it will be on his timeline.

But now it's clear: My boy knows he's smart.

"Yes, you are so smart," I said, and kissed his cheek.

Max giggled, pleased with himself.