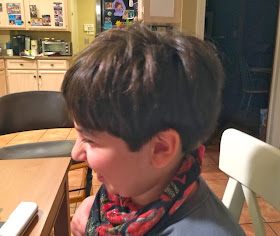 This weekend, Max discovered blinking. We were working on his weekly book report and I think he needed a break because all of a sudden, he started to blink rapidly at me with both eyes and crack up. I did, too. He scrunched up his nose each time he closed his eyes, and I could see the movement took concerted effort.

I often wonder how it feels to be in Max's body. He has spastic four quad cerebral palsy, which basically means all of his limbs have some stiffness, along with the muscles in his jaw. The term scared the crap out of me when I first heard it when Max was a baby. Still, we learned it was not a prognosis. Max was able to bicycle his legs, an alternate movement that's the basis of walking. The therapists and doctors said Max had a good chance of being able to walk and he did, independently, on his third birthday.

Max's hands and arms are more affected by the CP. Grasping objects remains challenging, though it's improved over the years. He can't easily raise his arms up and rarely supinates them (which means turning them so your palms are facing up).

I've read that people with CP can have painful cramps and I worry that Max gets them, although over the years he has gotten better at telling us when something hurts. I wonder if he feels it when his muscles are stiffer or whether it's his norm and he thinks nothing of it. A number of times I've asked, "Max, do your arms hurt?" when they seemed particularly stiff and he's said, "No!"

When Max realizes his body has the power to do something, it's a thrill for us all. I can still remember how psyched Dave and I were a few years ago when he figured out how to blow his nose into a tissue. We don't take any muscle movement for granted. The inchstones still feel like biggies. Although Max's ability to slide the Monsters University DVD into the player has become less of a cause for celebration because he can watch that movie again and again (and again) as we learned this snowy weekend.

Dave and I have sweet memories of Max mastering movements: Feeding himself, giving kisses, walking up the stairs, dancing, isolating his pointer finger to tap on the iPad. This is the year he started giving hugs. He can't wrap his arms around me so he holds them straight and smushes his head and body into mine. I love, love, love those hugs.

The blinking isn't going to get Max into college or anything, but the fact that he's feeling it—and aware of it—is amazing. Dave and I kept asking him to do it; we all got a kick out of it. Maybe one of these days Max will master the one-eyed blink and charm the lady therapists even more.