Being a scary monster is a beautiful thing 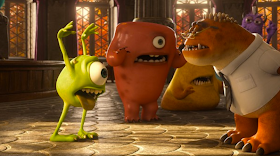 When Max was a baby, it concerned me that he didn't have a blankie or a favorite stuffed animal or toy. So much about his development was different than my friends' babies, and I wished that this one simple thing would be typical. But Max never took to any object in particular.

When Max got older, I got him dress-up stuff—a fireman coat, a policeman uniform. Dave and I set up a mini puppet theater and did shows for him. Max wasn't particularly interested in any of it. I worried about his lack of imaginative play.

The Thomas the Tank train set and table he got at age five was a game-changer; for the first time, Max got into pushing trains around. Both his grasp and focused had improved, enabling him to play on his own. He started doing it with toy cars, too.

I've looked up information on pretend play. It seems that pretense and receptive and expressive language start developing between age one and two. Max's delays in language and cognition had affected his pretend play—and perhaps vice versa. Pretend play is shown to enhance cognition, along with linguistic competence and even problem-solving skills.

Role-playing was never his thing, but Max is full of surprises. This summer, as he rode his bicycle along our street, I heard him say "One, two, three, go!" and then he took off, pedaling as fast as he could. Max was pretending to be a race car driver.

I long ago stopped wishing for the developmental milestones that never came, wishes that caused me a lot of pain when Max was a baby. No matter how much I yearned for Max to do stuff, he would proceed through life on his own timeline, and nobody else's. I still have plenty of hope that Max will accomplish things, everything from dressing himself independently to reading proficiently, but I no longer ache for them to happen. It's patience that's come from my own maturity as a parent and, if I'm being honest, perhaps a little complacency, too.

Then Max will do something for the first time, and I get a bliss rush that's one of the best feelings I have ever known. The progress is there, slow and steady as it's always been. Like the other day in the kitchen, I said "Max, come on, you cannot have a third glass of chocolate milk!" and Max looked at me and said "Oh, OK!" It was the first time I'd ever heard him say that phrase, and I grinned. It wasn't just that he was articulating the words—there was a tone I'd ever heard before, a bit of cheerful irreverence.

The inchstones still feel major, every single one of them. (Just please God, let him never master the eye roll.)

Last night, as I sat in bed with Max reading the Monsters University book—he'd picked it out at the bookstore—he gestured toward his pillow, lay down, then sat up and gave a little yell.

If you haven't yet seen the movie, there's a scene in which monsters have to scare a robot child in a staged bedroom as part of a competition. One by one they creep up to the bed on the set, give their best "ROARRRRR!" and then robo-kid sits upright and lets out a bloodcurdling fake scream.

Max wanted to recreate the scene; he'd be the robot kid, I'd be the monster.

And so, he lay down and pretended to sleep. As he pretend snored, I shut off the lights and closed his door. I sloooowly opened it and tip-toed toward his bed. Max let out a little giggle. Then I shouted, "ROARRRRR!" and Max sat up and yelled. We both cracked up.

We did it maybe seven or eight times, each funnier than the last.

I am, evidently, an excellent scary monster. And it was all Max's idea. And I loved it.