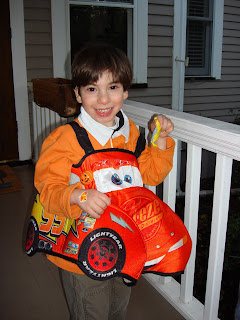 This is an essay I wrote, Just Call Us Halloweenies, that originally appeared in Redbook's October 2010 issue. It's about Halloween, but mostly it's about acceptance and letting go of preconceptions you have about what it means to enjoy childhood. I had no idea that the essay would be controversial, but it inspired some people to chide me for not dressing the kids up and others to berate my parenting. Hope your kids celebrate the holiday in whatever way makes them happiest. Max is going as Lightning McQueen (duh!) and Sabrina will be a lovely skeleton with "blood" running through her veins. If your kids are dressing up, who are they going to be? If not, what fun plans do you have?

My son's first Halloween was scary, for both of us. At 10 months old, Max functioned at a four-month level. A stroke at birth had caused brain damage and serious delays; doctors weren't sure how disabled he would be. Still, I wanted him to have the fun-tastic rite of passage everyone enjoys as a kid—the thrill of dressing up, the glee of dumping out the night's haul. That October, I got Max a ridiculously cute velour pumpkin costume and took him to our town's parade. Hundreds of kids milled around, store owners doled out candy corn, a loudspeaker blasted "Monster Mash."

Max freaked out. His sensory issues were just beginning to surface, and the crowd and noise terrified him. I felt awful for him, and mournful. We left the other families in town at the party and went home.

I tried again next year (Max as a puppy) and the year after (Max as Thomas the Tank Engine). He wailed; I cried. By the time Max's fourth Halloween rolled around and he'd been diagnosed with cerebral palsy, I'd given up on the parade. My husband took our 2-year-old, Sabrina, while Max and I carved out our own celebration. He put on a fireman's hat, I swung him on our backyard swing, and then we downed double-fudge ice cream. It was his idea of a good time and, unexpectedly, mine too; Sabrina could represent our family amid the sugar-fueled swarms.

But, no. Last year, both kids refused to dress up, Sabrina joining Max in a show of sibling solidarity. At first I begged her to wear the Ariel getup ($39!!!) I'd bought. And then, I let go. We would do Halloween our way, in T-shirts and sweatpants. That would be our tradition, as quirky as our family itself.

And so off we went, trick-or-treating. "Who are you?" neighbors asked, perplexed by my costume-less children. "I'm Sabrina!" said Sabrina. "Ax!" said Max. Best costumes ever.