A different voice: Explaining my child with Down syndrome to her sibling 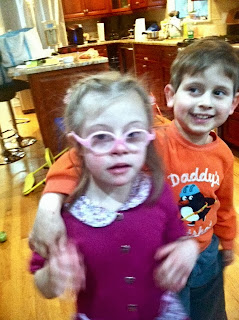 This guest post is from Hallie Levine Sklar, a wonderful writer who's mom to three children and one gregarious lab retriever.

About a month ago, right before bedtime, my four-year-old son Teddy crawled into my lap, wrapped his arms around me and said, “Mommy, why does Jo Jo talk in a different voice?”

“What do you mean, Teddy Bear?” I asked, smoothing back his bangs from his forehead, but of course I knew. Jo Jo is Teddy’s older sister. She’s five, with huge hazel eyes and a sensational mane of ash blonde hair. She also has Down syndrome.

“She talks in a different voice,” Teddy persisted, staring at me. He’s got the exact same eyes as Jo Jo, flecked with specks of brownish gold and green, but while hers have a slight almond tilt—one of the hallmarks of Down syndrome—his are wide set and round.

I hesitated. I wasn’t sure what to say. Jo Jo and Teddy are 17 months apart. For a while, they were like twins, and then, when Teddy turned two I watched as his verbal skills exploded overnight and he began to talk in elaborate sentences while my 3½-year-old daughter struggled still to say single words. Within a matter of weeks, he’d surpassed her developmentally, but he still played with her, still splashed in the bath with her and sang songs with her and insisted they draw together.

Over the last few weeks, though, I’d noticed a change. He’d begun asking why the bus that came to our house each morning to take Johanna to kindergarten was “short” rather than a regular size school bus, why she still needed help dressing herself or writing her name or kicking a soccer ball, all things he had mastered and could now do effortlessly. “Jo Jo sometimes just needs some extra help,” I’d say, and he’d nod and race away to join Geoffrey, his two-year-old brother, in tormenting the dog or some other boys-only activity.

“We all talk in a different voice, Teddy,” I said. “Everyone has their own special unique voice.”

He shook his head. “Geoffrey has the same voice as me,” he said pointedly.

“You and Geoffrey are both boys,” I said, somewhat foolishly.

But Teddy wasn’t buying it. “Jo Jo talks in a different voice than Sarah,” he said, looking at me reproachfully. Sarah is Teddy’s number one girlfriend, the one he insists he’ll marry when he grows up and buys a house (Jo Jo will live with them, of course).

“Well, how do you think she’s different?” I challenged him.

“She doesn’t talk as much as me or Geoffrey,” he said. “And her voice is low and sometimes, and sometimes Mommy when I talk to her she doesn’t always answer. And sometimes she talks and I can’t understand what she’s saying.”

I sighed. He’d gotten it, all right. Jo Jo’s not only less verbal, because she has such low muscle tone in her mouth even when she does speak it’s less intelligible, and she has trouble making the right speech sounds.

“Teddy,” I said, cradling him in my arms, “Jo Jo is just like you and me. But she has a condition called Down syndrome, which means that sometimes it’ll take her a little longer to do things like talk or read or ride a bike. She’ll do them, eventually, but it’s a little harder for her.”

He sat for a moment, obviously digesting this. “It’s harder because she has Down syndrome?”

“And that’s why she talks in a different voice?”

He looked worried. “But will she be able to talk like me and Geoffrey?”

“I don’t know,” I said honestly. “But she’ll always be able to talk, in her own unique Jo Jo way.”

He pulled away from me and stared off into space, frowning, his face furrowed in concentration. I waited for what he would say next, bracing himself for questions about Down syndrome and what it was and why Jo Jo had it and he didn’t.

“Yes, baby?” I asked, wondering what would come out of his mouth.

“When I go on the bus to kindergarten next year, can I go as a girl?”

Teddy didn’t bring up Jo Jo having Down syndrome again, but after that conversation he seemed even more protective of her. A few days later, at the park, I noticed that Jo Jo was having trouble scaling the steps of the jungle gym. Before I had time to even react, Teddy was at her side. I watched him as he gently reached for her arm and helped her climb up to the top. When she got there, she shrugged his hand off, but he stayed a few feet away from her, watching her as she shuffled, holding onto the rails for support, until she reached the slide. She hesitated again, and within seconds my son was right there behind her, guiding her to sit down and taking her hand as they both flew down the side. When they reached the bottom she got up and went over to the swings while he went back and rejoined his friends, glancing over at her occasionally to make sure she was alright.

That night, as he got into his pajamas, he said to me, conversationally, “Jo Jo needed help today on the playground.”

“It’s because she has Down syndrome,” he said, his voice muffled as he pulled his pajama top over his head.

“What do you think about that?” I asked carefully.

That Sunday, Jo Jo and Teddy had Sunday School. Although Johanna was already in kindergarten I’d kept her in the preschool program with Teddy for one more year, partly because it would involve hiring an aide only once a month versus once a week, and partly because I got the sense Teddy liked being in the same classroom as her.

As we walked into the synagogue, he looked somberly up at me. “Will there be someone there to give Jo Jo extra help?”

I had to come back to the classroom a couple hours later to lead a crafts project. When I walked in, the kids were just trickling back from the playground outdoors. I watched as my son and daughter walked in. The aide was clutching Jo Jo’s left hand and Teddy was protectively hovering on her right, his arm resting gently on her back as he guided her towards the front of the room.

“Everything okay?” I asked the aide in a low voice.

“Great,” she smiled, and then, softly, “you know, he wouldn’t even let her out of his sight.”

I thought about that, as I showed the kids how to build castles and we layered pretzel logs upon huts of graham crackers. While I was grateful my son was so protective, I worried. I’d assumed Jo Jo would repeat kindergarten so they would both be in the same grade together, but now I worried. Would Teddy feel so much pressure to take care of Jo Jo it would overshadow everything else?

After class, I took Jo Jo to the bathroom. Teddy and Geoffrey insisted on accompanying us for moral support. As we were washing our hands, another little girl who looked slightly older than Jo Jo walked in. She blanched at seeing two boys in the girls bathroom, but when she saw my daughter her face relaxed. “It’s Jo Jo!” she said to me in surprise.

“We were in the same camp group this summer,” she said. “Sometimes I pushed her on the swing.” She studied Jo Jo for a minute, who was standing in front of the mirror, gesticulating and singing.

Then she turned to me. “Why doesn’t Jo Jo talk normally?” she asked

The choice of words stung, and I flinched. But the little girl continued to look at me, patiently waiting for the answer as to why Jo Jo, her erstwhile camp compatriot, didn’t speak the same way she did.

Then Teddy stepped in front of her. “My sister Jo Jo,” he began.

The little girl started at him, surprised, and he blanched. He can be painfully shy sometimes, and I watched as a blush spread across his cheeks up to the tips of his ears.

“My sister Jo Jo,” he said again, then stopped.

“My sister Jo Jo, she talks in a different voice,” he said. The little girl cocked her head and narrowed her eyes, sizing up this little boy in a blue sports coat who stumbled over his words but still spoke so earnestly.

“She talks in a different voice because she has Down syndrome,” he said, his voice rising with confidence, “and that’s okay.”

The two locked eyes for a moment.

“It’s okay,” he said, nodding his head in reassurance.

The girl shrugged. “Sure,” she said and skipped into one of the stalls.

The four of us walked out of the restroom, Jo Jo singing, Geoffrey chattering, and Teddy quiet. I reached out and squeezed his hand. “I am proud of you, my little bear,” I said.

He looked at me curiously. “Why, Mommy?”

“You did a nice job of talking about Jo Jo to that girl,” I said instead.

“Oh,” he said, and he squeezed my hand back. Then he looked up at me, his eyes pensive. “Jo Jo’s voice is normal, it’s just different,” he said.

“Yes,” I said. “You’re right.” As we walked out into the sunshine, I realized I didn’t have to worry about undue pressure being placed on Teddy at all. At four years old, he had gamely stepped up to the plate as Jo Jo’s advocate, a pint sized crusader in his little striped button down shirt and brown loafers.

For Teddy, Jo Jo is the same Jo Jo he grew up with, the same sister he’s shared a room with and had pillow fights with for about as long as he can remember. She’s the same girl he’s always known, the girl who loves singing Katy Perry at the top of her lungs and swirling around the bedroom with scarves and knows her entire set of Llama Llama books by heart.

She’s his sister Jo Jo, who talks in a different voice because she has Down syndrome, and that’s okay.