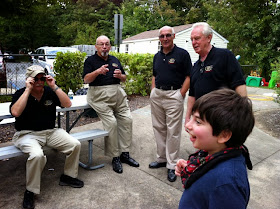 This weekend, Max's school had a little festival. Max had a great time playing games and winning (purple) prizes, making sand art (purple, purple and more purple) and saying hi to his friends (not purple).

There was a barbershop quartet strolling around and serenading kids. Max watched them sing, fascinated. Then he said, "Cars 2 Talking Lightning McQueen" and gestured to them, and I knew he was hoping they could sing a song about it.

Max didn't have his iPad and speech app handy. Still, I wanted him to tell the guys what was on his mind. I'm really pushing him to be more independent, and also trying to boost his confidence about how he communicates with people. While I am fine with serving as his trusty translator, I'd like Max to use his words. This can be a challenge, given that even I don't always understand what he's articulating, but I think it's important that he keep trying. His speech therapists agree. Ideally, his speech app is around so he can use it if his message isn't coming across.

We went over to the men and introduced ourselves.

"Arrs ooh aw-eeen ihning eh-eeen!" Max said, and I mentioned that Max has a thing for a toy he called Cars 2 Talking Lightning McQueen, and that the character was from the Cars movies.

"He wants us to sing something from the movie?" one of the men asked. I answered, "Well, really, he wants a song about..."

The quartet started improvising a song that had the words "fast car." Max shook his head and corrected them: "Arrs ooh aw-eeen ihning eh-eeen!" Because, well, an obsession is an obsession. I explained to Max that they were being nice by coming up with a song at all. That's when they said they'd think on a song involving Lightning McQueen.

A bit later, I saw the guys on the side, practicing. And then, they sang to him; the look on Max's face pretty much says it all.

After, I clapped hard and thanked them profusely.

Later, one of the men emailed an MP3 of the group singing the full song:

It is now Max's favorite song; he seems proud that he made it happen. He also seems to get that having a barbershop quartet sing a song about Lightning McQueen is a very special thing. So far, he hasn't asked me if they will make an appearance at his Cars 2 bowling party, but that can't be far off.